Dear Baby,: A Love Letter to Little Ones (Hardcover) 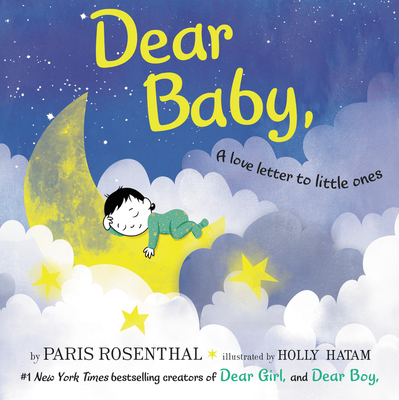 Filled with loving advice and encouragement, Dear Baby, reminds little ones that the world is big, bright, and ready just for them. There’s no limit to what they can be, where they can go, or what they can do! With the same tenderness as Dear Girl, and Dear Boy, Paris’s charming text and Holly Hatam’s stunning illustrations beautifully come together to reassure babies everywhere that no matter how far they go, they are loved.

Perfect for fans of I Wish You More by Amy Krouse Rosenthal; The Wonderful Things You’ll Be by Emily Winfield Martin; Oh, The Places You’ll Go! by Dr. Seuss; and Be Brave Little One by Marianne Richmond.

Don't miss out on these other books from Paris Rosenthal and Holly Hatam:

Holly Hatam is the illustrator of the #1 New York Times bestsellers Dear Girl, and Dear Boy, which she had the pleasure of creating with Amy, Paris, and Jason Rosenthal. Some of her other books include Made by Maxine, written by Ruth Spiro, and Jack (Not Jackie), written by Erica Silverman. Holly lives in Whitby, Ontario, with her wacky husband and even wackier son.

"This inspirational self-help book is a heartwarming ode to babies from many ethnic groups. A great introduction for toddler story hours, and a sweet additional purchase for collections geared to lapsitters and the smallest listeners."
— School Library Journal

"One for the baby-shower lists!"
— Kirkus Reviews

An ideal book for parents to share with their children at bedtime.
— Metroland