The Note Through the Wire: The Incredible True Story of a Prisoner of War and a Resistance Heroine (Paperback) 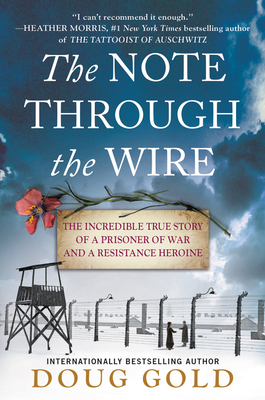 Praised as an “unforgettable love story” by Heather Morris, New York Times bestselling author of The Tattooist of Auschwitz, this is the real-life, unlikely romance between a resistance fighter and prisoner of war set in World War II Europe.

In this true love story that defies all odds, Josefine Lobnik, a Yugoslav partisan heroine, and Bruce Murray, a New Zealand soldier, discover love in the midst of a brutal war.

In the heart of Nazi-occupied Europe, two people meet fleetingly in a chance encounter. One an underground resistance fighter, a bold young woman determined to vanquish the enemy occupiers; the other a prisoner of war, a man longing to escape the confines of the camp so he can battle again. A crumpled note passes between these two strangers, slipped through the wire of the compound, and sets them on a course that will change their lives forever.

Woven through their tales of great bravery, daring escapes, betrayal, torture, and retaliation is their remarkable love story that survived against all odds. This is an extraordinary account of two ordinary people who found love during the unimaginable hardships of Hitler’s barbaric regime as told by their son-in-law Doug Gold, who decided to tell their story from the moment he heard about their remarkable tale of bravery, resilience, and resistance.

Doug Gold is a retired broadcaster with a passion for historical and fact-based stories, and the author of Fun Is a Serious Business, a nonfiction account of More FM’s David-versus-Goliath success story. He lives in Wellington, New Zealand, with his wife, Anemarie.

“The Note Through the Wire is a moving and uplifting story of love, courage and bravery amidst the horrors of war. It is a reminder that even in the most horrific times love will find a way and ultimately conquer. I can’t recommend it enough.”
— Heather Morris, #1 New York Times bestselling author of The Tattooist of Auschwitz

“The book is sensational – an absolute page-turner, full of love but also the grim realities of what war was like for those on the ground.”
— Women’s Weekly

"Well-researched and pieced together, the book will appeal to fans of wartime love stories and resistance tales in general. A memorable and uplifting work."
— Kirkus Reviews

“An exciting account of Josefine’s life in Slovenia, the shocking Nazi occupation, and the partisan activities … An informative novel.”
— Historical Novels Review