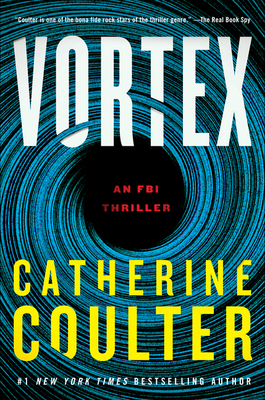 This is book number 25 in the An FBI Thriller series.

#1 New York Times bestselling Catherine Coulter returns with a brilliant new novel in her FBI thriller series, in which agents Sherlock and Savich find themselves dealing with very powerful figures from the past who could wreak havoc in the present.

Seven years ago, Mia Briscoe was at a college frat rave with her best friend, Serena, when a fire broke out. Everyone was accounted for except Serena, who was never seen nor heard from again. Now an investigative journalist covering the political scene in New York City, Mia discovers old photos taken the night of Serena’s disappearance and begins to uncover a sinister string of events going all the way back to that disastrous party. Working with Sherlock, the secrets begin to unravel. But some very powerful—and very dangerous—people will do anything to keep them from learning the truth.

CIA Operative Olivia Hildebrandt is a team leader on a mission in Iran to exfiltrate a betrayed undercover operative. She’s nearly killed by an exploding grenade and saved by a team member. But by the time Olivia is released from Walter Reed Hospital, that team member and a critical flash drive he was carrying have disappeared. When Olivia is attacked on her first night home, Savich suspects that the strike is a direct result of the compromised mission and the missing team member and flash drive. But what intelligence was at stake and who betrayed them?

Catherine Coulter is the #1 New York Times bestselling author of eighty-seven novels, including the FBI Thriller series and A Brit in the FBI international thriller series, cowritten with J.T. Ellison. Coulter lives in Sausalito, California, with her Übermensch husband and their two noble cats, Peyton and Eli.

“If you are looking for a roller coaster, highly emotional ride then you will really want to sit down with Vortex in your hands…Vortex—by definition is a ‘whirling mass like a whirlpool or whirlwind’ and Catherine Coulter knows how to catch her readers in one…As always with Ms. Coulter’s books, Vortex will captivate and fascinate.” — Fresh Fiction

“Coulter is always good, but in Vortex she uses her considerable talents to spin a complex tale of escalating stakes in a full-bore thriller that is not to be missed.” — Providence Journal

“Coulter… knows who her characters are, and what motivates them, and she knows what kind of adversary to put up against them… [The FBI novels] are suspenseful and surprising, and they have earned their large following. Vortex will be received enthusiastically.” — Booklist

“A new release from Catherine Coulter is always a special treat for suspense thriller fans—fans who will devour Vortex…[a] fast-paced, action-filled read.”  — The Big Thrill

"Intricate... Coulter expertly weaves all the plot threads together. Fans of extravagant thrillers with a paranormal tinge will be satisfied." — Publishers Weekly on Deadlock

“An action-filled, dangerously twisted storyline . . . will have you completely glued to the pages as the story lines are intertwined expertly.” — Fresh Fiction on Deadlock

"Eerie, unsettling, and breathlessly terrifying, Paradox is another gripping read from Catherine Coulter, who, at twenty-two books into her bestselling series and counting, shows no signs whatsoever of slowing down anytime soon." — The Real Book Spy

"Pulse-pounding...Coulter fans will have a tough time putting this one down." — Publishers Weekly on Paradox

"You're going to want to grab a copy." — Bustle on Labyrinth

"Catherine Coulter is one of the bonafide rockstars of the thriller genre, and her last book, Paradox, was as good as anything she’s written. Labyrinth promises to be another 'white-knuckled' thriller, which means Coulter’s fans better get their pre-ordering on nice and early." — The Real Book Spy

“If there’s one thing that readers can count on in a Coulter novel it is that she always delivers amazingly eerie and complex thrillers.”  — RT Book Reviews

“Action is nonstop ... Perfect reading for the beach and beyond.”  — Booklist

“Bestseller Coulter is at the top of her game in her 21st FBI thriller featuring married agents Dillon Savich and Lacey Sherlock." — Publishers Weekly

“Great characters with an interesting story make for a really enjoyable read… I couldn’t put this book down it was so good. A real page-turner.” — Red Carpet Crash

“Coulter, one of the best…suspense authors, is in top form, providing readers with pulse-pounding mystery that continues until the breathless conclusion.” — Library Journal (starred review) on DoubleTake

“Coulter is at the top of her game here.”    — Booklist on Power Play

“Brilliant and enthralling…Coulter once again delivers a work brimming with action, chase scenes, and terrific characterizations.” — The Best Reviews on Point Blank

“The things you can count on in a Catherine Coulter book are a complex storyline with plenty of action, intrigue, and unexpected twists and turns. Labyrinth has all that and more… With white-knuckled pacing and shocking twists and turns, this is another electrifying novel that will sink its teeth in you.”  — Fresh Fiction