Heavy Metal: The Hard Days and Nights of the Shipyard Workers Who Build America's Supercarriers (Hardcover) 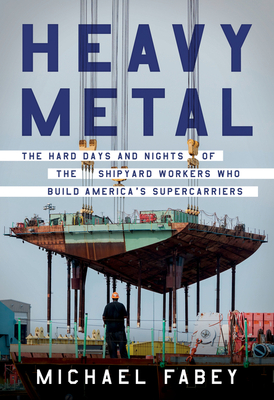 An extraordinary story of American can-do, an inside look at the building of the most dangerous aircraft carrier in the world, the John F. Kennedy.

Tip the Empire State Building onto its side and you’ll have a sense of the length of the United States Navy’s newest aircraft carrier, the most powerful in the world: the USS John F. Kennedy. Weighing 100,000 tons, Kennedy features the most futuristic technology ever put to sea, making it the most agile and lethal global weapon of war.

Only one place possesses the brawn, brains and brass to transform naval warfare with such a creation – the Newport News Shipbuilding yard in Virginia and its 30,000 employees and shipyard workers. This is their story, the riggers, fitters, welders, electricians, machinists and other steelworkers who built the next-generation aircraft carrier.

Heavy Metal puts us on the waterfront and into the lives of these men and women as they battle layoffs, the elements, impossible deadlines, extraordinary pressure, workplace dangers and a pandemic to complete a ship that will be essential to protect America’s way of life.

The city of Newport News owes its very existence to the company that bears its name. The shipyard dominates the town—physically, politically, financially, socially, and culturally. Thanks to the yard, the city grew from a backwater to be the home of the premier naval contractor in the United States.

Heavy Metal captures an indelible moment in the history of a shipyard, a city, and a country.

Michael Fabey has reported on military and naval affairs for most of his career. In his work for National Geographic Traveler, the Economist Group, Defense News, Aviation Week, and Janes, he has collected more than two dozen reporting awards, including the prestigious Timothy White Award. Few journalists have had as much firsthand experience of America’s naval ships and aircraft and the officers who command them. He is the author of Crashback: The Power Clash Between the US and China in the Pacific. A Philadelphia native, he currently resides in Spotsylvania, Virginia.

"Journalist Fabey (Crashback) chronicles the construction of the USS John F. Kennedy at a Newport News, Va., shipyard in this richly detailed account… Fabey also empathetically portrays the workers’ fears of layoffs, illnesses, injuries, and mistakes, as well as the satisfaction they take in contributing to the national defense. This poignant portrait of working-class life will appeal to fans of Studs Terkel." — Publishers Weekly

“Heavy Metal, which plows sturdily through the swells and troughs of big-ticket ship construction, does a noble thing in affirming that nowhere else in the world has this species of freedom been built so well and for so long.” — Wall Street Journal

“Heavy Metal presents a fresh, sympathetic perspective on the human aspects of the shipbuilding industry. It is an excellent read for anyone looking to understand the technology behind the design and construction of the Gerald R. Ford-class carriers. This book would be useful to crews preparing for complex shipyard periods.” — U.S. Naval Institute’s Proceedings

“One can hardly read this book without thinking that the nation owes those shipbuilders far more than it knows.” — Daily Press