The Greatest Beer Run Ever: A Memoir of Friendship, Loyalty, and War (Paperback) 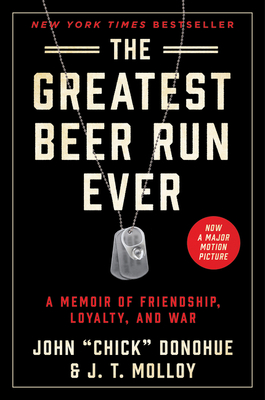 A U.S. Marine veteran is "drafted" by his friends to undertake a dangerous and unprecedented journey to deliver local beer- and best wishes and familial greetings- to neighborhood “boys” serving in Vietnam. Donohue's travel log features countless tales of his remarkable luck at actually finding his old friends at their war posts without somehow getting himself killed. Along the way, he refreshes our collective memory regarding how poorly enlisted men were treated stateside and, through his first hand account, fills in details of the war itself that many readers may have long since forgotten or never even known. — Jon Fine

An amazing ride from start to finish. Join John Donohue as he does the unthinkable. Hitchhiking across the active combat zone that was Vietnam all so that he can bring some friends from his hometown some good American beers. What started as a simple trip in Donohue’s mind quickly became so much more as he was caught in the middle of the Tet offensive. This book is surprising, suspenseful and informative as well as John not only educating the reader on what it was like back home during Vietnam but what it was like overseas for the soldiers and the Vietnamese themselves.This is one of those books where once you finish it you would give anything so you could reread it for the first time and experience the excitement of what will happen next, because chances are you will never be ready for what happens during the greatest beer run ever. — Jordan Starks

“Chickie takes us thousands of miles on a hilarious quest laced with sorrow, but never dull. You will laugh and cry, but you will not be sorry that you read this rollicking story.”—Malachy McCourt

A wildly entertaining, feel-good memoir of an Irish-American New Yorker and former U.S. marine who embarked on a courageous, hare-brained scheme to deliver beer to his pals serving Vietnam in the late 1960s.

One night in 1967, twenty-six-year-old John Donohue—known as Chick—was out with friends, drinking in a New York City bar. The friends gathered there had lost loved ones in Vietnam. Now they watched as anti-war protesters turned on the troops themselves.

One neighborhood patriot came up with an inspired—some would call it insane—idea. Someone should sneak into Vietnam, track down their buddies there, give them messages of support from back home, and share a few laughs over a can of beer.

It would be the Greatest Beer Run Ever.

But who’d be crazy enough to do it?

One man was up for the challenge—a U.S. Marine Corps veteran turned merchant mariner who wasn’t about to desert his buddies on the front lines when they needed him.

A day later, he was on a cargo ship headed to Vietnam, armed with Irish luck and a backpack full of alcohol. Landing in Qui Nho’n, Chick set off on an adventure that would change his life forever—an odyssey that took him through a series of hilarious escapades and harrowing close calls, including the Tet Offensive. But none of that mattered if he could bring some cheer to his pals and show them how much the folks back home appreciated them.

This is the story of that epic beer run, told in Chick’s own words and those of the men he visited in Vietnam.

John &#8220Chick” Donohue joined the United States Marine Corps at the age of seventeen, then became a Merchant Mariner after his discharge. After the war, he became a Sandhog, or tunnel builder, and eventually became the Legislative and Political Director of Sandhogs, Local 147, Laborers International Union of North America., and graduated from Harvard University’s John F. Kennedy School of Government He is married to Theresa “Terri” O’Neil.

J.T. Molloy was a staff reporter and columnist at the NY Daily News, the NY Post, and New York magazine. She has written for Politico, Esquire, and Interview. She lives in Brooklyn with her husband and son.

“John (Chickie) Donohue happens to be one of the best storytellers anywhere. He knows that though life may be funny, it is no joke. In this book you will see through his eyes the absurdity of the human condition. Chickie takes us thousands of miles on a hilarious quest laced with sorrow, but never dull. You will laugh and cry, but you will not be sorry that you read this rollicking story.” — Malachy McCourt

“Donohue’s memoir is a fascinating, vividly narrated recollection of the chaos of the Vietnam war.” — Publishers Weekly (starred review)

"The story of a patriotic prankster’s freelance incursion into Vietnam, bringing cheer (and beer) to Americans at war… An irreverent yet thoughtful macho adventure reflecting the tumult of a fast-fading era." — Kirkus Reviews

“The Greatest Beer Run Ever is the astounding true story of a young man’s odyssey. On these pages we accompany Chick Donohue as he takes us on a fantastic voyage from the streets of Manhattan via the high seas to the jungles and cities of Vietnam at the height of a war fought mostly by forgotten blue collar kids…This book is both a testament to the fading notions of loyalty and brotherhood and an elegy for the working class enclaves that once formed the backbone of a city and nation.” — Thomas Kelly, Author of Payback, The Rackets, and Empire Rising and executive producer, Copper, The Get Down, and Civil

“John 'Chick' Donohue is an American legend…He bore witness to some of the most ground-shaking events of the era while somehow managing to honor his friends.  This book is an unforgettable, brilliantly written wild ride from start to finish, filled with humor, action, poignancy and wrenching moments. The Greatest Beer Run Ever will remain in your heart and mind long after you’ve turned the last page.” — John Bruning, New York Times bestselling author of Indestructible