Simon the Fiddler: A Novel (Paperback) 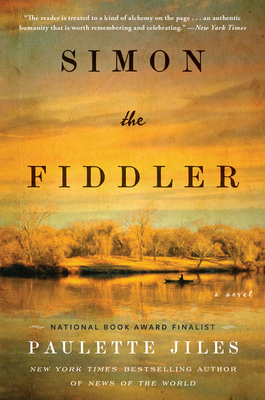 By Paulette Jiles
$16.99
Click Title for IN STOCK Location

Simon Boudlin and his fiddle were conscripted into the Confederate Army to provide music for the last vestiges of a lost cause. When the Civil War ends, he brushes the Texas dust off of his tattered clothes, gathers up a motley group of fellow musicians, and sets off to realize his dreams. This is another wonderful adventure story from the author of News of the World. Simon is reminiscent of some of Mark Twain's decent, goodhearted protagonists with just a touch of a crusty Larry McMurtry character added as a zesty garnish. I enjoyed every minute of his determined quest.

This vivid story is about Simon Boudlin, an itinerant fiddler, who resists being conscripted in the Confederate army in the end days of the Civil War, after Appomattox. This novel is poetic, fierce, and elegant without losing the hard edge of historical facts. Like the song, "The Night They Drove Ol' Dixie Down," (The Band) the mournful beauty of this novel echoes the music: the two pieces feel as though they were written in 1865, and not in this century. Simply Beautiful. — Maeve Noonan

“Simon Boudlin’s passion is to be the best fiddle player there is, beholden to no one and following his muse wherever it takes him. But when he meets the beautiful Doris Aherne, his plans change. Paulette Jiles once again captures the great promise and sweeping beauty of the Texas frontier in cinematic prose as poetic and lyrical as the tunes that pour forth from the fiddler himself. Simon joins that great pantheon of strivers for a better life, and readers will root for him every step of the way. Fans of News of the World can rejoice — with Simon the Fiddler, Jiles has done it again!”
— Peter Sherman, Wellesley Books, Wellesley, MA

The critically acclaimed, bestselling author of News of the World and Enemy Women returns to Texas in this atmospheric story, set at the end of the Civil War, about an itinerant fiddle player, a ragtag band of musicians with whom he travels trying to make a living, and the charming young Irish lass who steals his heart.

In March 1865, the long and bitter War between the States is winding down. Till now, twenty-three-year-old Simon Boudlin has evaded military duty thanks to his slight stature, youthful appearance, and utter lack of compunction about bending the truth. But following a barroom brawl in Victoria, Texas, Simon finds himself conscripted, however belatedly, into the Confederate Army. Luckily his talent with a fiddle gets him a comparatively easy position in a regimental band.

Weeks later, on the eve of the Confederate surrender, Simon and his bandmates are called to play for officers and their families from both sides of the conflict. There the quick-thinking, audacious fiddler can’t help but notice the lovely Doris Mary Dillon, an indentured girl from Ireland, who is governess to a Union colonel’s daughter.

After the surrender, Simon and Doris go their separate ways. He will travel around Texas seeking fame and fortune as a musician. She must accompany the colonel’s family to finish her three years of service. But Simon cannot forget the fair Irish maiden, and vows that someday he will find her again.

Incandescent in its beauty, told in Paulette Jiles’s trademark spare yet lilting style, Simon the Fiddler is a captivating, bittersweet tale of the chances a devoted man will take, and the lengths he will go to fulfill his heart’s yearning.

"Jiles’ sparse but lyrical writing is a joy to read. . . . Lose yourself in this entertaining tale.” — Associated Press

Paulette Jiles is a novelist, poet, and memoirist. She is the author of Cousins, a memoir, and the novels Enemy Women, Stormy Weather, The Color of Lightning, Lighthouse Island, and News of the World, which was a finalist for the 2016 National Book Award. She lives on a ranch near San Antonio, Texas.

“The reader is treated to a kind of alchemy on the page when character, setting and song converge at all the right notes, generating an authentic humanity that is worth remembering and celebrating.”
— New York Times

“Jiles’ sparse but lyrical writing is a joy to read. . . . A beautifully written book and a worthy follow-up to News of the World.”
— Associated Press

“Imbued with the dust, grit, and grime of Galveston at the close of the Civil War, Simon the Fiddler immerses readers in the challenges of Reconstruction. Jiles brings her singular voice to the young couple's travails, her written word as lyrical and musical as Simon's bow raking over his strings. Loyal Jiles readers and fans of Anthony Doerr's All the Light We Cannot See and Elizabeth Strout's Olive Kitteridge will adore the author's latest masterpiece."
— Booklist (starred review)

“Endearing . . . And when the final battle royal arrives in San Antonio, it’s just the rousing ballad we want to hear.”
— Washington Post

“In Simon the Fiddler we once again accompany a cast of intriguing characters on a suspenseful Texas-based quest just after the Civil War. . . . A crackling-good adventure tale.”
— Minneapolis Star Tribune

"[Jiles's] description of Simon and Doris traveling on separate journeys across the Texas landscape is superb, causing us to feel the elation and sense of possibility that rises in the hearts of man, woman and beast in setting out on the road.”
— Wall Street Journal

“Jiles makes Texas in the 1800s hot and palpable for her readers, edgy and lawless, but the story also sings with melody.”
— Book Trib