These Violent Delights: A Novel (Paperback) 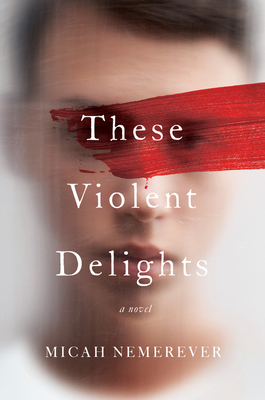 A Literary Hub Best Book of Year • A Crime Reads Best Debut of the Year • A Newsweek 25 Best Fall Books • A Philadelphia Inquirer 10 Big Books for the Fall • An O Magazine.com LGBTQ Books That Are Changing the Literary Landscape in 2020 Selection • An Electric Lit Most Anticipated Debut of the Second Half of 2020 • A Paperback Paris Best New LGBTQ+ Books To Read This Year Selection • A Passport Best Book of the Month

The Secret History meets Lie with Me in Micah Nemerever's compulsively readable debut novel—a feverishly taut Hitchcockian story about two college students, each with his own troubled past, whose escalating obsession with one another leads to an act of unspeakable violence.

When Paul enters university in early 1970s Pittsburgh, it’s with the hope of moving past the recent death of his father. Sensitive, insecure, and incomprehensible to his grieving family, Paul feels isolated and alone. When he meets the worldly Julian in his freshman ethics class, Paul is immediately drawn to his classmate’s effortless charm.

Paul sees Julian as his sole intellectual equal—an ally against the conventional world he finds so suffocating. Paul will stop at nothing to prove himself worthy of their friendship, because with Julian life is more invigorating than Paul could ever have imagined. But as charismatic as he can choose to be, Julian is also volatile and capriciously cruel, and Paul becomes increasingly afraid that he can never live up to what Julian expects of him.

As their friendship spirals into all-consuming intimacy, they each learn the lengths to which the other will go in order to stay together, their obsession ultimately hurtling them toward an act of irrevocable violence.

Unfolding with a propulsive ferocity, These Violent Delights is an exquisitely plotted excavation of the depths of human desire and the darkness it can bring forth in us.

Micah Nemerever studied art history and queer theory at the University of Connecticut, where he wrote his MA thesis on gender anxiety in the art of the Weimar Republic. His fiction and poetry can be found in SLICE Magazine and The Carolina Quarterly. He lives in the Pacific Northwest.

"As unsettling as it is enthralling, These Violent Delights will engulf you: first in the intoxication of obsession, then in its toxic consequences. Micah Nemerever's debut is a beautiful portrait of intimacy, desperation, and the damage that damaged hearts can cause. It shattered me." — Robin Wasserman, author of Girls on Fire and Mother Daughter Widow Wife

“Nemerever does a crafty job of slowly ratcheting up the tension.... A clever novel of manners.” — New York Times

“These Violent Delights is an utterly captivating fever dream of a novel whose tone and atmosphere will haunt you long after you finish. More haunting still is the skill with which Micah Nemerever reveals to us the lengths we will go to in order to be known, to be seen, to be understood. A thrilling first novel.” — Brandon Taylor, author of Real Life

“It’s only a matter of time before things start to explode in this enthralling, unpredictable thriller.” — Patrick Rapa, Philadelphia Inquirer

"Nemerever's darkly shrewd debut exists in that hazy liminal space between desire and obsession, where the vagaries of a relationship come shaded with the constant threat of cruelty." — Michelle Hart, O Magazine.com

“Nemerever’s debut tackles obsession, destruction, sex, and the intersection of all three…. Nemerever’s prose is haunting and beautiful, powerful, and twisted… it will keep you up at night, turning page after page.” — Jen St. Jude, Chicago Review of Books

“A gorgeous and wickedly smart novel. I was so seduced by the dazzling love story of these two vulnerable young men I became an unwitting accomplice in their swerve toward violence. Nemerever has created a rich, engrossing, and morally complex book filled with dark truths and dangerous delights.” — Christopher Bollen, author of A Beautiful Crime

“Readers who need some thrill in their life will find this page-turner very binge-able. Micah Nemerever showcases a lot of skills on the pages, but it is the intricate plotting that propels this novel forward.” — Adam Vitcavage, Electric Lit

“Nemerever has done something extraordinary in his debut novel. He’s mixed eloquent and vivid writing with psychological depth and an addictive plot….  Akin to Bronte’s Wuthering Heights… the intensity of Paul and Julian’s climatic moment at the novel’s end [is] a moment worthy of Emily Bronte herself.” — Mikey Byrd, Lambda Literary

“[A] dark, inspired debut…. Fans of Patricia Highsmith will definitely want to take note of this promising writer.” — Publishers Weekly

“Visceral, intimate, and all-consuming, this gutsy debut is both intellectual and fiercely animal. A chilling exploration into desire and infatuation that questions how well we ever really know our lovers—or ourselves. Nemerever’s propulsive, crystalline language and gutting insights make the pages fly by, hurtling you toward the inevitable, astounding ending.” — Julia Fine, author of What Should Be Wild

“An impressive, ambitious debut that raises the right questions about what we talk about when we talk about love between men... Nemerever’s novel does difficult, critical work in confronting the ritualized violence that so often characterizes male relationships.” — Mel Magazine

“These Violent Delights is a captivating portrait of alienation and loneliness with the cool gaze of a Highsmith novel. Punctuated by arpeggios of violence and rage, Micah Nemerever has crafted a thrilling page-turner anchored in an examination of desire, love, and moral inquiry.” — Patrick Cottrell, author of Sorry to Disrupt the Peace