Hitler’s Girl: The British Aristocracy and the Third Reich on the Eve of WWII (Hardcover) 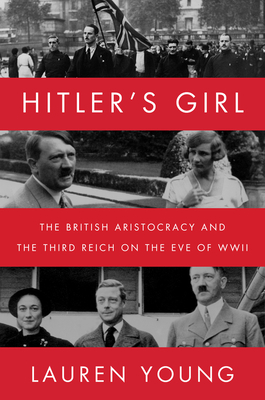 A timely, riveting book that presents for the first time an alternative history of 1930s Britain, revealing how prominent fascist sympathizers nearly succeeded in overturning British democracy—using the past as a road map to navigate the complexities of today’s turn toward authoritarianism.

Hitler’s Girl is a groundbreaking history that reveals how, in the 1930s, authoritarianism nearly took hold in Great Britain as it did in Italy and Germany. Drawing on recently declassified intelligence files, Lauren Young details the pervasiveness of Nazi sympathies among the British aristocracy, as significant factions of the upper class methodically pursued an actively pro-German agenda. She reveals how these aristocrats formed a murky Fifth Column to Nazi Germany, which depended on the complacence and complicity of the English to topple its proud and long-standing democratic tradition—and very nearly succeeded.

As she highlights the parallels to our similarly treacherous time, Young exposes the involvement of secret organizations like the Right Club, which counted the Duke of Wellington among its influential members; the Cliveden Set, which ran a shadow foreign policy in support of Hitler; and the shocking four-year affair between socialite Unity Mitford and Adolf Hitler.

Eye-opening and instructive, Hitler’s Girl re-evaluates 1930s England to help us understand our own vulnerabilities and poses urgent questions we must face to protect our freedom. At what point does complacency become complicity, posing real risk to the democratic norms that we take for granted? Will democracy again succeed—and will it require a similarly cataclysmic event like World War II to ensure its survival? Will we, in our own defining moment, stand up for democratic values—or will we succumb to political extremism?

Lauren Young is an academic and policy consultant specializing in security and defense issues. She is a lecturer at Yale University, where she teaches in the Department of Political Science and the Jackson School for Global Affairs. She lives in New York City.

“A frank and timely exploration of a seminal era in modern history deserving of more attention. Young's engaging work shines a spotlight on this pivotal moment between the World Wars by bringing some of its most complicated personalities to the fore and thus reminding us that there is always more to discover, even when we think we know the whole story.” — Catherine Grace Katz, author of The Daughters Of Yalta: The Churchills, Roosevelts, and Harrimans

“Confirms not only the danger British fascists posed to the nation but also the government’s embarrassing, often inexplicable unwillingness to take steps against them. . . . A cautionary tale for today [when] Democratic institutions are fragile and many of the problems roiling the waters of the ’30s are ascendant again.” — Library Journal

"A fresh analysis of fascism in 1930s Britain. . . . Thanks to newly opened and expanded archives, the author is able to expose a host of fascist-leaning figures during the 1930s, revealing the shockingly broad complacency and complicity among the aristocratic class." — Kirkus Reviews

“Hitler’s Girl is required reading for anyone interested in the rise of Nazism and in the counter-factual mentioned at the outset. Lauren Young has given us a gift and has also warned us about the times we live in now which in so many ways resemble the period from 1933 to 1938 when Hitler could have been stopped.” — Counter Currents