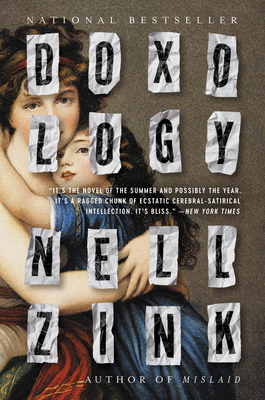 By Nell Zink
$17.99
Click Title for IN STOCK Location

Nell Zink has long been tipped as a novelist to watch. At last, here is a teeming magnum opus of life at the end of the last century and the beginning of the next. As the American empire careens towards a final reckoning with the logic of late capitalism, Zink presents the masque of anarchy as seen through the eyes of a couple of indie rock veterans raising their child in downtown Manhattan. Zink's prose has the ability to make you giggle with recognition and then sideswipe you with an insight that belies her years. For anybody who has lived through the time (that is to say, all of us), the book is a touchstone of opportunities met and missed. It's also a reminder that for all the mistakes we might have made, decency is still possible--even if we have to work at it. Like a plane crashing into the World Trade Center, Doxology is impossible to stop and hits the reader where they live.

Two generations of an American family come of age—one before 9/11, one after—in this moving and original novel from the “intellectually restless, uniquely funny” (New York Times Book Review) mind of Nell Zink

Pam, Daniel, and Joe might be the worst punk band on the Lower East Side. Struggling to scrape together enough cash and musical talent to make it, they are waylaid by surprising arrivals—a daughter for Pam and Daniel, a solo hit single for Joe. As the ‘90s wane, the three friends share in one another’s successes, working together to elevate Joe’s superstardom and raise baby Flora.

On September 11, 2001, the city’s unfathomable devastation coincides with a shattering personal loss for the trio. In the aftermath, Flora comes of age, navigating a charged political landscape and discovering a love of the natural world. Joining the ranks of those fighting for ecological conservation, Flora works to bridge the wide gap between powerful strategists and ordinary Americans, becoming entangled ever more intimately with her fellow activists along the way. And when the country faces an astonishing new threat, Flora’s family will have no choice but to look to the past—both to examine wounds that have never healed, and to rediscover strengths they have long forgotten.

At once an elegiac takedown of today’s political climate and a touching invocation of humanity’s goodness, Doxology offers daring revelations about America’s past and possible future that could only come from Nell Zink, one of the sharpest novelists of our time.

Nell Zink grew up in rural Virginia. She has worked in a variety of trades, including masonry and technical writing. In the early 1990s, she edited an indie rock fanzine. Her books include The Wallcreeper, Mislaid, Private Novelist, and Nicotine, and her writing has appeared in n+1, Granta, and Harper’s. She lives near Berlin, Germany.

“It’s the novel of the summer and possibly the year. It’s a ragged chunk of ecstatic cerebral-satirical intellection. It’s bliss…. “Doxology” puts [Zink] on a new level.... She lays her heart on the line in a way she hasn’t before…. Zink writes as if the political madness of the last four decades had been laid on for her benefit as a novelist.”
— New York Times

“A distinct, unflinching look at the country’s past and future.”
— Time

“A master of compassionate satire bestows another off-kilter epic.”
— O, the Oprah Magazine

“With the precision of a sniper, Nell Zink nails the disorientation of coming of age in the 1980s.… [Zink’s] most ambitious novel…. Ms. Zink writes with such momentum, and seems to be having so much fun, that she can make a story that traverses some of the darkest moments in recent history (9/11, both Iraq wars, the 2016 election) into an exhilarating and grimly amusing page turner…. “Doxology” is surprisingly uplifting.”
— Wall Street Journal

"Has Nell Zink written the Great American Gen-X Novel?....  “Doxology” comes out swinging for a center spot in the literary canon.... One of the most notable novels of the year."
— Chicago Tribune

“[The] subtle intersection of the ordinary and the absurd is [Zink’s] trademark maneuver. Wit ricochets around her straight-faced sentences like marbles in a can.... The most endearing aspect of “Doxology” is the resilient joy racing through Zink’s characters.... Her portrait of the parasitic relationship between fans and their idols is hilarious.... Zink is an astute critic of our recent election and its alarming abuses.”
— Washington Post

“Charming and ambitious, encompassing the most serious themes of the 21st century while remaining comic and earthbound….[Zink is] a distinctive figure in American literature, almost gleefully unimpressed with pieties…. [Zink] suffers no delusions about society’s challenges. But she has a remarkable talent for taking our disorderly world and giving it a shape that feels funny, humane and true.”
— USA Today

“Sweeping…. Powerful…. Zink could [always] merrily explode a weird subculture and expose its ugliness and beauty… But in this book, she balances this specificity (Coding! Punk rock! D.C. neighborhoods!) in the service of what feels like a larger goal.”
— Los Angeles Times

“Sharp, empathetic, and at once critical and hopeful, following an oddball trio from their beginnings as a terrible punk band in 1990s Lower East Side through their coming of age into a post-9/11 New York and world.”
— Buzzfeed

“The first truly great novel to tackle the 2016 election…. She’s sharper, slyer, than ever before…. No one can write a one-liner like Zink….  [Zink] captures those doomed final days before November 8, 2016, more accurately than any breathlessly reported account from any political reporter or former campaign worker.”
— Paris Review

“The dualism at the heart of Zink’s entertaining and clever novel is another approach to an ancient puzzle: What part of ourselves do we allow to lead us? …. Bittersweet and brilliant.”
— Minneapolis Star Tribune

“Zink’s gifts for characterization and richly evoked periods and places are on display throughout.... Ambitious.”
— Publishers Weekly

“The prolific and cult-beloved Zink could find a broader audience with this engaging family chronicle, which depicts two generations of an American clan, pre- and post-9/11.”
— Entertainment Weekly

“A tender story about what it means to be a good person and a good parent in trying times…. Zink is a sharp observer of current events…. Doxology circles around a coterie of gentle, likable characters.… More than a few readers will see in their story reflections of their own lives.”
— Shelf Awareness