Into the Raging Sea: Thirty-Three Mariners, One Megastorm, and the Sinking of El Faro (Large Print / Paperback) | Northshire Bookstore
Skip to main content

Into the Raging Sea: Thirty-Three Mariners, One Megastorm, and the Sinking of El Faro (Large Print / Paperback) 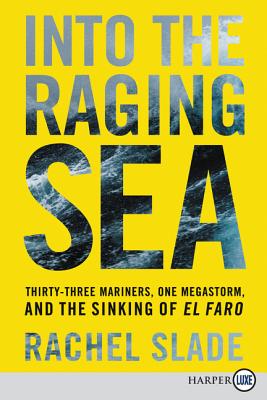 In 2015 a container ship sank off the coast of the Bahamas in Hurricane Joaquin. 33 souls perished. With modern technology, how could this happen? This is nonfiction at its best, with the ship's last 26 hours of conversation recorded and transcribed in incredible detail, and a great look into the history of the Merchant Marine. — Hanna Yost

WINNER OF THE MAINE LITERARY AWARD FOR NON FICTION

AN NPR BEST BOOK OF THE YEAR

ONE OF JANET MASLIN’S MUST-READ BOOKS OF THE SUMMER

ONE OF OUTSIDE MAGAZINE’S BEST BOOKS OF THE SUMMER

ONE OF AMAZON'S BEST NONFICTION BOOKS OF THE YEAR SO FAR

“A Perfect Storm for a new generation.”
—Ben Mezrich, bestselling author of The Accidental Billionaires: The Founding of Facebook

On October 1, 2015, Hurricane Joaquin barreled into the Bermuda Triangle and swallowed the container ship El Faro whole, resulting in the worst American shipping disaster in thirty-five years. No one could fathom how a vessel equipped with satellite communications, a sophisticated navigation system, and cutting-edge weather forecasting could suddenly vanish—until now.

Relying on hundreds of exclusive interviews with family members and maritime experts, as well as the words of the crew members themselves—whose conversations were captured by the ship’s data recorder—journalist Rachel Slade unravels the mystery of the sinking of El Faro. As she recounts the final twenty-four hours onboard, Slade vividly depicts the officers’ anguish and fear as they struggled to carry out Captain Michael Davidson’s increasingly bizarre commands, which, they knew, would steer them straight into the eye of the storm. Taking a hard look at America's aging merchant marine fleet, Slade also reveals the truth about modern shipping—a cut-throat industry plagued by razor-thin profits and ever more violent hurricanes fueled by global warming.

A richly reported account of a singular tragedy, Into the Raging Sea takes us into the heart of an age-old American industry, casting new light on the hardworking men and women who paid the ultimate price in the name of profit.

Rachel Slade is a Boston-based journalist, writer, and editor. She was a staff writer at Boston magazine for ten years, and her writing earned her a City and Regional Magazine Award in civic journalism. She splits her time between Brookline, Massachusetts, and Rockport, Maine.

“For sheer drama on the water, it’s hard to beat the tragedy recounted in Rachel Slade’s Into the Raging Sea. . . . a fast-moving cinematic adventure. But for all of the drama, the worst scares are in the epilogue. This sinking was no simple accident.”
— Janet Maslin, New York Times

“In addition to a gripping narrative of a cargo ship’s tragic voyage into the eye of a hurricane, Slade explains the fascinating world of commercial shipping and the essential—but often hidden—role it plays in our economy.”
— NPR, “Best Books of 2018”

“More than the story of how a ship was overcome by a storm, Into The Raging Sea is an allegory for what it means to be a part of the nation’s largely invisible working and middle class.”
— Longreads

“With skillful narrative prose and sensitivity, Slade takes readers on the final voyage of the El Faro . . . provid[ing] a haunting intimacy to this maritime disaster.”
— Booklist

“An exhaustive account of what happens when tragedy claims a vicious price for our progress and greed. Slade’s book is a chance to name . . . and call to the fore the forces that robbed these mariners of their lives.”
— Paste Magazine

“A cautionary tale for leaders who think they have all the answers, for employees who choose not to speak up... and for organizations that rely on systems and processes that don’t provide the information its people need to make the best decisions.”
— Inc.

“Immensely powerful . . . exerts a relentless grip that makes the book hard to put down, right to the closing pages . . . This is an important title, with lessons that extend far beyond the terrible tragedy that it describes.”
— Nautilus Institute

“A powerful reading experience . . . . as gripping as any fictional thriller you’re likely to find . . . an exceptional work.”
— The Maine Edge

“Powerful and gripping . . . The depth of Slade’s reporting is impressive . . .  her storytelling ability even more so.”
— The Pennsylvania Gazette

“Well-crafted and gripping . . . Slade frames the tragedy with a meticulous review of all the ways in which it could have been avoided . . . a painful and poignant narrative.”
— Publishers Weekly (starred review)

“Successfully, and very powerfully, navigates the difficult channel between insiders and outsiders. [Slade’s] writing style will appeal to readers of nautical thrillers interspersing a fast-paced narrative of what was actually happening aboard the vessel as it collided with 120 mph eyewall of Hurricane Joaquin lurching through the Bahamas.”
— Seatrade Maritime News

“A Perfect Storm for a new generation, Into the Raging Sea is a masterful page-turning account of the El Faro’s sinking, one that leaves you profoundly moved by the crew’s dedication and grit, and infuriated at the disturbing conditions that led to this tragedy.”
— Ben Mezrich, bestselling author of The Accidental Billionaires: The Founding of Facebook

“Rachel Slade mashes up The Perfect Storm with a suspenseful, page-turning thriller, cutting through the corporate double-speak to shine a light on how it was that thirty-three men and women sailed into Hurricane Joaquin. Superbly written, this deserves a place on the bookshelf of modern maritime classics.”
— Robert Frump, Pulitzer Prize-winning journalist and author of Until the Sea Shall Free Them: Life, Death, and Survival in the Merchant Marine

“An extraordinary piece of reporting. I tore through it like a novel.”
— John Konrad, author of Fire on the Horizon: The Untold Story of the Gulf Oil Disaster

“With gripping prose and edge-of-the-seat momentum, Rachel Slade takes the reader aboard the final, fatal voyage of El Faro. Into the Raging Sea imparts a profound message about the power of nature and the fallibility of human judgement even in our digitized era.”
— Peter Stark, author of Astoria: Astor and Jefferson’s Lost Pacific Empire—A Tale of Ambition and Survival on the Early American Frontier

“Bracing ... a story as old as seafaring itself. This minute-by-minute account illustrates in chilling detail exactly what happens when the near-infinite might of the ocean plows broadside into the hubris of men.”
— Brantley Hargrove, author of The Man Who Caught the Storm: The Life of Legendary Tornado Chaser Tim Samaras

“Rachel Slade’s Into the Raging Sea made me miss my subway stop and cancel at least one appointment. It’s a gripping, moving account of a nautical tragedy, told with equal parts verve, gusto, and compassion. Don’t miss it.”
— Sarah Weinman, author of The Real Lolita: The Kidnapping of Sally Horner and the Novel that Scandalized the World