Everybody in the Red Brick Building (Hardcover) 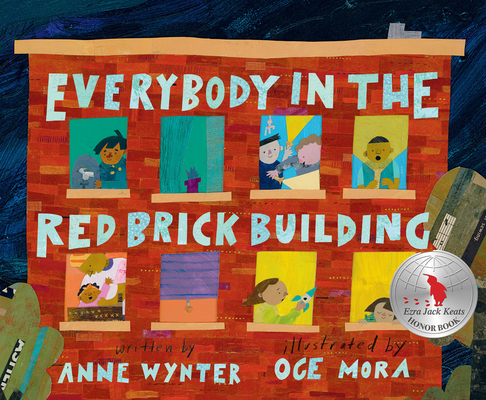 “An enchanting debut by author Anne Wynter with vivid illustrations by the incomparable Oge Mora, Everybody in the Red Brick Building is fabulous! A joy to read for the whole family.”
— Kathy Neff, Square Books, Oxford, MS

A fresh, urban take on bedtime stories in the spirit of The House That Jack Built and Chicka Chicka Boom Boom, from debut author Anne Wynter and Caldecott Honoree Oge Mora.

Everybody in the red brick building was asleep. Until . . .

A chain reaction of noises wakes up several children (and a cat) living in an apartment building. But it’s late in the night, so despite the disturbances, one by one, the building’s inhabitants return to their beds—this time with a new set of sounds to lull them to sleep.

Anne Wynter is originally from Houston, Texas, and currently lives in Austin, Texas, with her husband, their two children, and a cat. In addition to writing children’s books, she’s written more than a dozen short plays that have been produced around the country. Anne earned a degree in drama from Washington University in St. Louis, received a certificate in short story writing from the University of Chicago, and studied writing for children at the Writing Barn. Everybody in the Red Brick Building is her debut. To learn more about Anne or to say hello, visit www.annewynter.com.

Oge Mora graduated from Rhode Island School of Design with a BFA in illustration. Her debut picture book, Thank You, Omu!, was a Caldecott Honor Book, a New York Times Notable Book and Editors’ Choice, and a Junior Library Guild selection. She is also the author-illustrator of Saturday as well as the illustrator of The Oldest Student: How Mary Walker Learned to Read. Oge lives in Providence, Rhode Island, and invites you to visit her website at www.ogemora.com.