Semicolon: The Past, Present, and Future of a Misunderstood Mark (Hardcover) 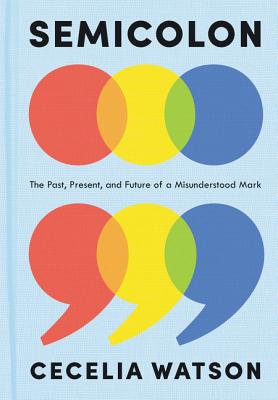 A dot above a comma: why is it so difficult to use, compared to a colon or question mark? It is maligned, misused, and marginalized in a manner commas never face, sometimes with great exclamation! Yet it soldiers on; it can enhance even the tritest sentences; it has earned its useful place in our language. — Mike Hare

A page-turning, existential romp through the life and times of the world’s most polarizing punctuation mark

The semicolon. Stephen King, Hemingway, Vonnegut, and Orwell detest it. Herman Melville, Henry James, and Rebecca Solnit love it. But why? When is it effective? Have we been misusing it? Should we even care?

In Semicolon, Cecelia Watson charts the rise and fall of this infamous punctuation mark, which for years was the trendiest one in the world of letters. But in the nineteenth century, as grammar books became all the rage, the rules of how we use language became both stricter and more confusing, with the semicolon a prime victim. Taking us on a breezy journey through a range of examples—from Milton’s manuscripts to Martin Luther King Jr.’s “Letters from Birmingham Jail” to Raymond Chandler’s The Big Sleep—Watson reveals how traditional grammar rules make us less successful at communicating with each other than we’d think. Even the most die-hard grammar fanatics would be better served by tossing the rule books and learning a better way to engage with language.

Through her rollicking biography of the semicolon, Watson writes a guide to grammar that explains why we don’t need guides at all, and refocuses our attention on the deepest, most primary value of language: true communication.

Cecelia Watson is a historian and philosopher of science, and a teacher of writing and the humanities. She is currently on Bard College’s Faculty in Language and Thinking. Previously she was an American Council of Learned Societies New Faculty Fellow at Yale University, where she was also a fellow of the Whitney Center for the Humanities and was jointly appointed in the humanities and philosophy departments.

“A deceptively playful-looking book that turns out to be a scholarly treatise on a sophisticated device that has contributed eloquence and mystery to Western civilization . . . Delightful.”
— Mary Norris, The New Yorker

“Lively . . . Watson covers impressive ground in this short book, skittering back and forth like a sandpiper at the shores of language’s Great Debates. . . fascinating.”
— New York Times

“What? Sit on the beach reading about punctuation? Yes, when it’s as fun, rangy, and witty as this.”
— Philadelphia Inquirer, “Big Summer Books”

“Pity the poor semicolon, punctuation’s wallflower, wrongfully maligned and too seldom asked to dance. Fortunately, this modest little powerhouse has found its defender. [Watson] is a witty, elegant writer with no nonsense about her.”
— New York Times Book Review

“Delightful, enlightening . . . The twisty history of the hybrid divider perfectly embodies the transience of language, the ways it can be shaped by cultural shifts that have nothing to do with correctness or clarity.”
— Vulture

“A delightful rabbit hole that I think even those who are not punctuation-obsessed will find eye-opening and strangely reassuring. If you enjoyed Between You & Me, Woe Is I, or Eats, Shoots & Leaves, Semicolon . . . is for you.”
— The Amazon Book Review, “Weekend Reading”

“Look, some people just enjoy arguing about punctuation. It’s in their nature. But if your enthusiasm for this polarizing little mark stems from adoration and inquisitiveness (and only occasionally the haughty knowledge that you’re right), Cecelia Watson’s “biography” of the semicolon will be a delightful companion.”
— Elle, “Thirty Best Books to Read This Summer”

“Charming . . . an argument for deep knowledge and style awareness, moving beyond strictures to something educated, intuitive, and graceful.”
— New York Journal of Books

“Buoyant . . . thought-provoking . . . this little book is something of a page-turner.”
— Santa Fe New Mexican

“Essential reading . . . Watson asks us to look hard at rules that pretend to be objective and consider their origins and implications; and in doing so, she advocates a skeptical, searching attitude that could usefully be taken toward many aspects of American life beyond grammar.”
— Boston Globe

“Your inner word nerd will love it.”
— Hello Giggles, “11 Best New Books to Read in July”

“All unloved things have their defenders . . . and the semicolon could not have asked for a better one than historian Cecelia Watson. . . . If anything will convince you of its artistic beauty and historic importance, it will be Semicolon.”
— Babbel

“Charts the rise and fall of the punctuation mark while examining how traditional grammar rules make us less successful at communicating with each other than we might think.”
— PureWow, “8 Books We Can’t Wait to Read in July”

“In this impressive debut, Watson . . . takes readers through a lively and varied ‘biography’ of the semicolon. . . . The stress on compassionate punctuation lifts this work from an entertaining romp to a volume worth serious consideration.”
— Publishers Weekly

“Informed and witty . . . from chapter to chapter, [Watson] brings a gadfly’s spirit to the proceedings, thoughtfully lobbying for written English that resists restrictions and recognizes that ‘rules will be, just as they always have been, inadequate to form a protective fence around English.’”
— Kirkus Reviews

“In Cecelia Watson’s hands, what starts as an exploration of the obscure origins of a modest punctuation mark becomes a slyly profound proof of the value of creative freedom itself. Grammar fiends and poetic anarchists alike will find Semicolon inspiring, challenging, and delightful.”
— Adrian Johns, Allan Grant Maclear Professor of History, University of Chicago

“Intimidated by the semicolon? Fear not: Cecelia Watson’s sprightly history is the perfect antidote to punctuation pedantry. It’s also a paean to the music of language by a writer with a silver ear.”
— Lorraine Daston, Director of the Max Planck Institute for the History of Science and Visiting Professor, The Committee on Social Thought, University of Chicago

“Cecelia Watson takes the history and logic of this strange, unbalanced punctuation mark and with an eloquently natural voice transforms them into a work of sane, funny, and humanistic philosophy; [couldn’t resist] it’s superb.”
— Daniel Menaker, author of The African Svelte: Ingenious Misspellings That Make Surprising Sense