Charming as a Verb (Paperback) 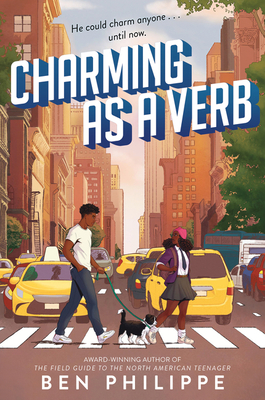 From the award-winning author of The Field Guide to the North American Teenager comes a whip-smart and layered romantic comedy. Perfect for fans of Nicola Yoon and Jenny Han.

Henri “Halti” Haltiwanger can charm just about anyone. He is a star debater and popular student at the prestigious FATE academy, the dutiful first-generation Haitian son, and the trusted dog walker for his wealthy New York City neighbors. But his easy smiles mask a burning ambition to attend his dream college, Columbia University.

There is only one person who seems immune to Henri’s charms: his “intense” classmate and neighbor Corinne Troy. When she uncovers Henri’s less-than-honest dog-walking scheme, she blackmails him into helping her change her image at school. Henri agrees, seeing a potential upside for himself.

Soon what started as a mutual hustle turns into something more surprising than either of them ever bargained for. . . .

This is a sharply funny and insightful novel about the countless hustles we have to keep from doing the hardest thing: being ourselves.

Ben Philippe is a New York–based writer and screenwriter, born in Haiti and raised in Montreal, Canada. He has a Bachelor of Arts from Columbia University and an MFA in fiction and screenwriting from the Michener Center for Writers in Austin, Texas. He also teaches film studies and screenwriting at Barnard College. He is the author of the William C. Morris Award–winning novel The Field Guide to the North American Teenager. Find him online at www.benphilippe.com.

“Henri’s narrative swagger effortlessly charms the reader, but it’s his growing self-awareness that gives this delightful novel its depth… An intelligently narrated romance with plenty of witty banter and a diverse cast.” — Bulletin of the Center for Children’s Books (starred review)

"This book is quite charming and will have readers cheering for Henri and Corrine....A diverse cast of characters, racial tensions, and ethical dilemmas make this so much more than just a simple romance." — School Library Journal (starred review)

“Morris Award winner Philippe turns up the charm in his sophomore novel…From its dynamic, easy-to-love characters to the endearing prose, this novel easily embodies Henri's cultivated suaveness, and his unusually confident persona, bring a fresh perspective.” — ALA Booklist

“A witty, humorous, realistic snapshot of the pressures young people face as they make their way into adulthood. Through memorable, multifaceted characters, Philippe explores themes of how race, class, and socioeconomic status can open doors for some, while closing them for others. Refreshing, romantic, and at times laugh-out-loud funny, the book is satisfying and, yes, charming.” — Horn Book Magazine

Praise for FIELD GUIDE: “A witty debut with whip-smart dialogue that will find much love among fans of authors like John Green and Jason Reynolds.”
— School Library Journal (starred review)

“Ben Philippe’s sparkling dialogue along with prose that occasionally borders on lyrical (although in a completely cool, hip, manly way) is sure to delight readers. Norris’ evolution from cynical outsider to caring insider is a journey well-worth following—especially as it’s accompanied with laugh out loud moments [and]insightful revelations.”
— New York Journal of Books

“With a perfect balance of snark, keen observation, and wry humor, Ben Philippe has given us the brilliant Norris Kaplan—by far, the funniest, wittiest, smartest character I’ve ever read! Norris Kaplan would be the perfect teen host for The Daily Show!”
— Ibi Zoboi, author of American Street, National Book Award finalist

“A refreshing, captivating read, one which will definitely appeal to its teen target audience but will also satisfy older readers, who will appreciate its clarity and emotional acuity.”
— Toronto Star

“In Philippe’s funny debut, 16-year-old black French-Canadian Norris Kaplan must navigate life and love in Austin, Tex., after he and his mother move there... Philippe has a gift for dialogue and touches on a few instances of racism with sensitivity and humor in this crowd-pleaser.”
— Publishers Weekly

“It’s no longer tenable to imagine that the anxieties of a white heterosexual young man expelled from an expensive prep school capture the spirit of our era. Today’s snarky young anti-hero instead looks like Norris, the black French Canadian boy in The Field Guide to the North American Teenager.”
— The Washington Post