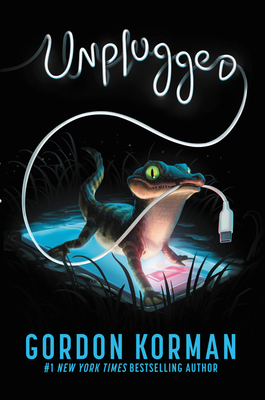 “As a Silicon Valley billionaire’s son, Jett Baranov is completely aware that he can get away with anything short of murder. After one incident too many, his dad ships him off to Oasis, a wellness camp in rural Arkansas. The worst part about it? No electronics of any kind are permitted. While he intends to decimate Oasis by whatever means necessary, he finds himself among a group of other kids his age who are secretly raising a baby alligator they dub Needles for his prickly teeth. As the team works together caring for their forbidden reptile, Jett and his friends find there is more going on at Oasis than meets the eye. Fans of Carl Hiaasen are sure to love Unplugged, an uproarious novel full of clever and crafty kids with brave and daring personalities.”
— Andrew King, University Book Store, Seattle, WA

From the New York Times bestselling author of The Unteachables, Gordon Korman, comes a hilarious middle grade novel about a group of kids forced to “unplug” at a wellness camp—where they instead find intrigue, adventure, and a whole lot of chaos. Perfect for fans of Korman’s Ungifted and the Masterminds series, as well as Carl Hiaasen’s eco mysteries.

As the son of the world’s most famous tech billionaire, spoiled Jett Baranov has always gotten what he wanted. So when his father’s private jet drops him in the middle of the Arkansas wilderness, at a place called the Oasis, Jett can’t believe it. He’s forced to hand over his cell phone, eat grainy veggie patties, and participate in wholesome activities with the other kids, who he has absolutely no interest in hanging out with.

As the weeks go on, Jett starts to get used to the unplugged life and even bonds with the other kids over their discovery of a baby-lizard-turned-pet, Needles. But he can’t help noticing that the adults at the Oasis are acting really strange.

Jett is determined to get to the bottom of things, but can he convince everybody that he is no longer just a spoiled brat who is making trouble?

Gordon Korman published his first book at age fourteen and since then has written more than ninety middle grade and teen novels. Favorites include the New York Times bestselling Ungifted, Supergifted, The Unteachables, Pop, Schooled, and the Masterminds series. Gordon lives with his family on Long Island, New York. You can visit him online at www.gordonkorman.com.

“A provocative take on the redemptive power of friends and pets.”
— ALA Booklist (starred review)