The Distant Dead: A Novel (Hardcover) 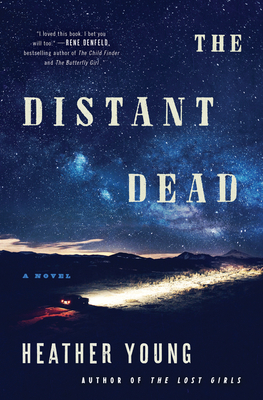 "Powerful...a breathtaking read, with flawed and authentic characters who hit so close to home that at times it is impossible not to root for them." — San Francisco Chronicle

A body burns in the high desert hills. A boy walks into a fire station, pale with the shock of discovery. A middle school teacher worries when her colleague is late for work. By day’s end, when the body is identified as local math teacher Adam Merkel, a small Nevada town will be rocked to its core.

Adam Merkel left a university professorship in Reno to teach middle school in Lovelock seven months before he died. A quiet, seemingly unremarkable man, he connected with just one of his students: Sal Prentiss, a lonely sixth grader who lives with his uncles on a desolate ranch in the hills. The two outcasts developed a tender, trusting friendship that brought each of them hope in the wake of tragedy. But it is Sal who finds Adam’s body, charred almost beyond recognition, half a mile from his uncles’ compound.

Nora Wheaton, the middle school’s social studies teacher, dreamed of a life far from Lovelock only to be dragged back on the eve of her college graduation to care for her disabled father, a man she loves but can’t forgive. She sensed in the new math teacher a kindred spirit--another soul bound to Lovelock by guilt and duty. After Adam’s death, she delves into his past for clues to who killed him and finds a dark history she understands all too well. But the truth about his murder may lie closer to home. For Sal Prentiss’s grief seems heavily shaded with fear, and Nora suspects he knows more than he’s telling about how his favorite teacher died. As she tries to earn the wary boy’s trust, she finds he holds not only the key to Adam’s murder, but an unexpected chance at the life she thought she’d lost.

Weaving together the last months of Adam’s life, Nora’s search for answers, and a young boy’s anguished moral reckoning, this unforgettable thriller brings a small American town to vivid life, filled with complex, flawed characters wrestling with the weight of the past, the promise of the future, and the bitter freedom that forgiveness can bring.

Heather Young earned her law degree from the University of Virginia and practiced law in San Francisco before beginning her writing career. She received an MFA from the Bennington College Writing Seminars, and has studied at the Tin House Writers’ Workshop and the Squaw Valley Writers Workshop. She lives in Mill Valley, California, with her husband and two children. The Lost Girls is her first novel.

"Powerful...a breathtaking read, with flawed and authentic characters who hit so close to home that at times it is impossible not to root for them."
— San Francisco Chronicle

"With her usual blend of inventive storytelling and gorgeous prose, Heather Young delivers big themes and a poignant coming-of-age story in this complex, page-turning mystery/thriller. Resonant and relevant, The Distant Dead kept me reading late at night, and the characters followed me around during the day, especially a precocious and unusual sixth-grade boy named Absalom who is hard to forget. As a fan of Young’s debut, The Lost Girls, I found myself swept into another beautifully-crafted story that’s even more suspenseful, at times more terrifying, and ultimately just as surprising. The Distant Dead is not to be missed."
— James McLaughlin, author of Bearskin

"A story that begins with a horrific discovery and expands to explore the weight of familial obligation, the far-reaching devastation of drug addiction and the ways in which guilt and boredom can curdle into something much more sinister...[Young's] language is poetic, and her contemplation of the corrosiveness of suppressed emotion is both sympathetic and impatient: When will people learn?"
— BookPage (starred review)

"Bright, flawless writing, wonderful characters, and a sense of pacing that ratchets up the tension—what more could you want from a thriller? I loved this book. I bet you will too."
— Rene Denfeld, bestselling author of The Child Finder and The Butterfly Girl

"[THE DISTANT DEAD] is at heart about the timelessness of human curiosity, the eternal possibility of forgiveness, and the everyday miracle of survival. Electrifying, ambitious, and crushingly beautiful."
— Kirkus Reviews (starred review)