Twelve Tribes: Promise and Peril in the New Israel (Hardcover) 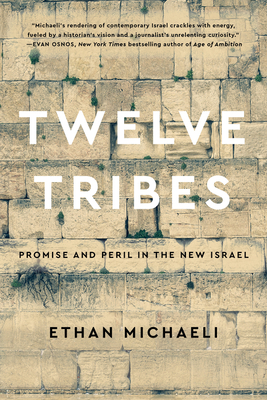 Part docuseries, part history lesson, and part travel guide, this book takes its reader on a meandering journey through parts of Israel and Palestine. A very good glimpse at an historic and complicated part of the world that most of us know little of substance about. — Arabella Peterson

An "illuminating" and "richly descriptive" (New York Times Book Review) portrait of contemporary Israel, revealing the diversity of this extraordinary yet volatile nation by weaving together personal histories of ordinary citizens from all walks of life.

“In Twelve Tribes, Ethan Michaeli proves he is a master portraitist – of lives, places, and cultures. His rendering of contemporary Israel crackles with energy, fueled by a historian’s vision and a journalist’s unrelenting curiosity.” — Evan Osnos, New York Times bestselling author of Age of Ambition and Wildland

In 2015, Israeli President Reuven Rivlin warned that the country’s citizens were dividing into tribes: by class and ethnicity, by geography, and along lines of faith. In Twelve Tribes, award-winning author Ethan Michaeli portrays this increasingly fractured nation by intertwining interviews with Israelis of all tribes into a narrative of social and political change. Framed by Michaeli’s travels across the country over four years and his conversations with Israeli family, friends, and everyday citizens, Twelve Tribes illuminates the complex dynamics within the country, a collective drama with global consequences far beyond the ongoing conflict with the Palestinians.

Readers will meet the aging revolutionaries who founded Israel’s kibbutz movement and the brilliant young people working for the country’s booming Big Tech companies. They will join thousands of ultra-Orthodox Haredim at a joyous memorial for a long-dead Romanian Rebbe in a suburb of Tel Aviv, and hear the life stories of Ethiopian Jews who were incarcerated and tortured in their homeland as “Prisoners of Zion” before they were able to escape to Israel. And they will be challenged, in turn, by portraits of Israeli Arabs navigating between the opportunities in a prosperous, democratic state and the discrimination they suffer as a vilified minority, as by interviews with both the Palestinians striving to build the institutions of a nascent state and the Israeli settlers seeking to establish a Jewish presence on the same land.

Immersive and enlightening, Twelve Tribes is a vivid depiction of a modern state contending with ancient tensions and dangerous global forces at this crucial historic moment. Through extensive research and access to all sectors of Israeli society, Michaeli reveals Israel to be a land of paradoxical intersections and unlikely cohabitation—a place where all of the world’s struggles meet, and a microcosm for the challenges faced by all nations today.

ETHAN MICHAELI is the author of The Defender: How the Legendary Black Newspaper Changed America—named a Notable Book of the Year by the New York Times and the Washington Post, a winner of Best Nonfiction prizes from both the Chicago Writers Association and the Society of Midland Authors, and short-listed for the Mark Lynton History Prize presented by the Columbia University Graduate School of Journalism. Previously, Ethan founded Residents’ Journal, a magazine written and produced by the tenants of Chicago’s public housing developments and an affiliated not-for-profit organization, We the People Media. Currently a lecturer at the University of Chicago Harris School of Public Policy, he is also a senior adviser for communications and development at the Goldin Institute, an international not-for-profit organization collaborating with social change activists in forty different countries. Ethan has served as a judge of national literary contests, and his shorter work has been published by Oxford University Press, the Washington Post, The Atlantic, the Forward, the Chicago Tribune, and other venues.

“These illuminating conversations with a wide variety of ordinary people — ultra-Orthodox Jews, Holocaust survivors, aging kibbutzniks, Ethiopian and Russian immigrants, Arab citizens of Israel, Jewish settlers and Palestinians in the West Bank — fill the pages of this richly descriptive book. … It is refreshing, therefore, to read a book about the lives of actual Israelis, which brings their cacophonous voices, rather than the author’s opinions, to the fore.”
— Dov Waxman, New York Times Book Review

“In his artfully crafted work, Michaeli deftly escorts the reader through the complexities and interactions of Israel’s populace; one rich in a diversity of opinion and practice. Read his book and you will come to understand modern day Israel as it is: a kaleidoscope of tribes.”
— Times of Israel

“In Twelve Tribes, Ethan Michaeli proves he is a master portraitist – of lives, places, and cultures. His rendering of contemporary Israel crackles with energy, fueled by a historian’s vision and a journalist’s unrelenting curiosity.”
— Evan Osnos, New York Times bestselling author of Age of Ambition and Wildland

"Ethan Michaeli writes about Israel with the objectivity of a keen observer and the passion of an insider with a personal stake in the future of the country. In this delightful journey through Israel’s radical diversity, he cautions us against hasty judgments. Love for the Israeli story, and anxiety for its future, animate this book."
— Yossi Klein Halevi, New York Times bestselling author of Letters to My Palestinian Neighbor and senior fellow at the Shalom Hartman Institute

"Twelve Tribes is a masterful work of history and storytelling, one that cuts through the fog of politics by focusing on the people and feelings at the heart of the story of Israel. Ethan Michaeli takes the reader on an unforgettable, eye-opening journey."
— Jonathan Eig, New York Times bestselling author of Ali: A Life

"Traveling with Ethan Michaeli as your welcoming guide, new worlds of understanding open up on a subject that can seem so exhaustingly stale. Israel becomes not a political football but a place--multicultural, multi-lingual, multi-cuisined, multi-centuried, multi-national, everything cheek-by-jowl, arguments breaking out everywhere and always—a magical thing so very much worth saving, somehow."
— Rick Perlstein, New York Times bestselling author of Reaganland

“Ethan Michaeli has a gimlet eye for the people, texture, and contradictions of modern Israel. I’m in awe of his powers of observation and his ability as a modern-day Tocqueville to take us inside one of the most complex and confounding countries in the world."
— Jonathan Alter, bestselling author of His Very Best: Jimmy Carter, a Life

"Ethan Michaeli has accomplished something of great value with Twelve Tribes. With his observant street level reporting and vivid writing, he has broken through stereotypes to reveal the multiplicity of Israel and the promise of its diverse peoples. From these ground level observations, I learned more about Israel than anything I'd read before."
— David Maraniss, Pulitzer Prize-winning author of A Good American Family: The Red Scare and My Father

"Marshaling an extraordinarily extensive network—from Palestinians to Haredim, from teenagers to nonagenarians, from kibbutzniks to businesswomen, from organizers to bystanders—Ethan Michaeli here proves himself an insightful guide through the many facets of today’s Israel. Quietly and cheerfully nudging both his interviewees and his readers, he gets at the truth—not only that there are no easy answers, but also that there are so many complicated ones."
— Yuval Taylor, author of Zora and Langston: A Story of Friendship and Betrayal

"Forget what you think you know — in this fascinating work of nonfiction, Michaeli captures various groups of this fractured country and brings to life how complex and intertwined everyone can be. ... Rather than provide easy answers, this is a book that invites you to meet all of these people and hear their stories and take a look into their lives. It’s perfect for starting a book club discussion and challenging ideas people might have prior to reading it."
— Book Riot

"Michaeli’s engrossing narrative of Israel today, free of Washington’s policy debates and international negotiations, is a work of history from the ground up, meant to document the country at this particular moment."
— National Book Review

"While traveling across Israel, Michaeli takes an in-depth look at the patchwork of identities that make up contemporary Israeli society, from kibbutzniks to Ethiopian olim to Israeli Arabs."
— Jewish Insider

"A wide-ranging variety of on-the-ground reportage, uncovering a teeming world of Israelis and Palestinians working and living in uneasy proximity. Whether visiting the Tel Aviv suburbs, fashionable cafes in Jerusalem, the West Bank, or Ponevezh Yeshiva, 'one of the essential institutions of the Haredi world,' Michaeli reveals aspects of the country’s character that historians and journalists have been unable to capture."
— Kirkus Reviews