Chasing the Demon: A Secret History of the Quest for the Sound Barrier, and the Band of American Aces Who Conquered It (Paperback) 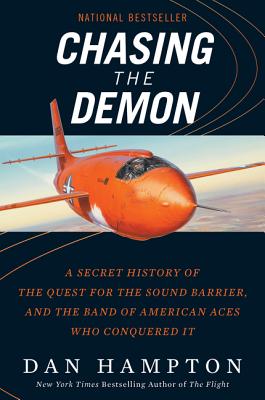 NATIONAL BESTSELLER • At the end of World War II, a band of aces gathered in the Mojave Desert on a Top Secret quest to break the sound barrier–nicknamed "The Demon" by pilots. The true story of what happened in those skies has never been told.

Speed. In 1947, it represented the difference between victory and annihilation.

After Hiroshima, the ability to deliver a nuclear device to its target faster than one’s enemy became the singular obsession of American war planners. And so, in the earliest days of the Cold War, a highly classified program was conducted on a desolate air base in California’s Mojave Desert. Its aim: to push the envelope of flight to new frontiers. There gathered an extraordinary band of pilots, including Second World War aces Chuck Yeager and George Welch, who risked their lives flying experimental aircraft to reach Mach 1, the so-called sound barrier, which pilots called “the demon.”

Shrouding the program in secrecy, the US military reluctantly revealed that the “barrier” had been broken two months later, after the story was leaked to the press. The full truth has never been fully revealed—until now.

Chasing the Demon, from decorated fighter pilot and acclaimed aviation historian Dan Hampton, tells, for the first time, the extraordinary true story of mankind’s quest for Mach 1. Here, of course, is twenty-four-year-old Captain Chuck Yeager, who made history flying the futuristic Bell X-1 faster than the speed of sound on October 14, 1947. Officially Yeager was the first to achieve supersonic flight, but drawing on new interviews with survivors of the program, including Yeager’s former commander, as well as declassified files, Hampton presents evidence that a fellow American—George Welch, a daring fighter pilot who shot down a remarkable sixteen enemy aircraft during the Pacific War—met the demon first, though he was not favored to wear the laurels, as he was now a civilian test pilot and was not flying the Bell X-1.

Chasing the Demon sets the race between Yeager and Welch in the context of aviation history, so that the reader can learn and appreciate their accomplishments as never before.

Lieutenant Colonel (Ret.) Dan Hampton flew 151 combat missions during his twenty years (1986–2006) in the United States Air Force. For his service in the Iraq War, Kosovo conflict, and first Gulf War, Col. Hampton received four Distinguished Flying Crosses with Valor, a Purple Heart, eight Air Medals with Valor, five Meritorious Service medals, and numerous other citations. He is a graduate of the USAF Fighter Weapons School, USN Top Gun School (TOGS), and USAF Special Operations School. A frequent guest analyst on CNN, Fox News, and MSNBC discussing foreign affairs, military, aviation, and intelligence issues, he has published in Aviation History, the Journal of Electronic Defense, Air Force Magazine, Vietnam magazine, and Airpower magazine, and written several classified tactical works for the USAF Weapons Review. He is the author of the national bestsellers Viper Pilot and Lords of the Sky, as well as a novel, The Mercenary.

“Chasing the Demon flows very smoothly and tells a great story about the pioneers of high-speed flight, primarily from the pilots’ perspective.”
— JOHN D. ANDERSON, JR., curator of aerodynamics at the Smithsonian Institution’s National Air and Space Museum