All the Gallant Men: An American Sailor's Firsthand Account of Pearl Harbor (Hardcover) 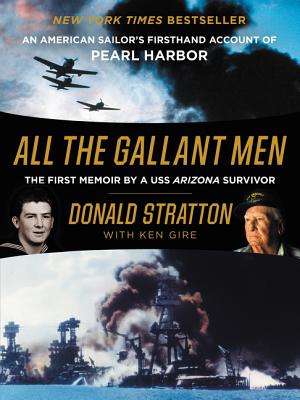 By Donald Stratton, Ken Gire
$25.99
Hard to Find - May no longer be available

Stratton, one of the last Pearl Harbor survivors, recalls his experiences in horrific detail. Battling physical and psychological scars, he achieves a balanced, productive life. Nearing the attack's 75th anniversary, the 94-year old Stratton struggles to forgive the enemies who forged his character on that infamous day. — Mike Hare

In this, the first memoir by a USS Arizona survivor, Donald Stratton delivers an inspiring and unforgettable eyewitness account of the Pearl Harbor attack and his remarkable return to the fight.

At 8:06 a.m. on December 7, 1941, Seaman First Class Donald Stratton was consumed by an inferno. A million pounds of explosives had detonated beneath his battle station aboard the USS Arizona, barely fifteen minutes into Japan’s surprise attack on American forces at Pearl Harbor. Near death and burned across two thirds of his body, Don, a nineteen-year-old Nebraskan who had been steeled by the Great Depression and Dust Bowl, summoned the will to haul himself hand over hand across a rope tethered to a neighboring vessel. Forty-five feet below, the harbor’s flaming, oil-slick water boiled with enemy bullets; all around him the world tore itself apart.

In this extraordinary never-before-told eyewitness account of the Pearl Harbor attack—the only memoir ever written by a survivor of the USS Arizona—ninety-four-year-old veteran Donald Stratton finally shares his unforgettable personal tale of bravery and survival on December 7, 1941, his harrowing recovery, and his inspiring determination to return to the fight.

Don and four other sailors made it safely across the same line that morning, a small miracle on a day that claimed the lives of 1,177 of their Arizona shipmates—approximately half the American fatalaties at Pearl Harbor. Sent to military hospitals for a year, Don refused doctors’ advice to amputate his limbs and battled to relearn how to walk. The U.S. Navy gave him a medical discharge, believing he would never again be fit for service, but Don had unfinished business. In June 1944, he sailed back into the teeth of the Pacific War on a destroyer, destined for combat in the crucial battles of Leyte Gulf, Luzon, and Okinawa, thus earning the distinction of having been present for the opening shots and the final major battle of America’s Second World War.

As the seventy-fifth anniversary of the Pearl Harbor attack approaches, Don, a great-grandfather of five and one of five living survivors of the Arizona, offers an unprecedentedly intimate reflection on the tragedy that drew America into the greatest armed conflict in history. All the Gallant Men is a book for the ages, one of the most remarkable—and remarkably inspiring—memoirs of any kind to appear in recent years.

Born in 1922, Donald Stratton grew up in Red Cloud, Nebraska. Upon graduating high school in 1940, he enlisted in the United States Navy, and reported for duty on the battleship USS Arizona. After more than a year of recuperation following the Pearl Harbor attacks, Stratton reenlisted in the Navy and was commissioned to the destroyer USS Stack. From 1944-45, he served in the Pacific at the naval campaigns for New Guinea, the Philippines, and Okinawa. He has been married to his wife, Velma, for sixty-six years. They live in Colorado Springs.

Ken Gire is the bestselling author of more than twenty books, including Windows of the Soul. He is a graduate of Texas Christian University and Dallas Theological Seminary.

“A story of awe-inspiring courage and steely determination. ... Stratton’s book should be in every school library.”
— The Missourian

“Stratton tells his epic story in the memoir All the Gallant Men. ... Stratton would have been among the 1,177 USS Arizona shipmates — out of 1,511 aboard — who perished if not for a nail-biting escape.”
— New York Post

“An amazing story, and we’re lucky that Don Stratton decided to share it.
— Military.com

“Add[s] to the historical knowledge of Pearl Harbor. ... Deeply personal. ... Stratton’s book reminds us of a better America, an America that was strong in character, not just military power. ... As Stratton reminds us, true greatness comes from within.”
— Cal Thomas, nationally syndicated columnist