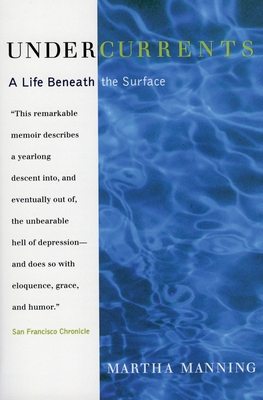 An incredibly moving account by a therapist who writes about her own bout with depression. Inspirational, funny, intimate, and hopeful. — Barbara Morrow

This is the memoir of an ordinary woman—a mother, a daughter, a psychologist, a wife—who tells the tale of her spiraling descent into a severe, debilitating depression. Undercurrents pioneers a new literature about women and depression that offers a vision of action instead of victimhood, hope instead of despair.

Martha Manning, Ph.D., is a writer, clinical psychologist, and former professor of psychology at George Mason University. She is the author of Undercurrents: A Life Beneath the Surface; Chasing Grace: Reflections of a Catholic Girl, Grown Up; and All Seasons Pass: Grieving Miscarriage. Manning has been recognized by the National Institutes of Mental Health for her work in education and advocacy and was awarded the American Psychiatric Association 1996 Presidential Award for Patient Advocacy. Her work has appeared in numerous publications, including the New York Times Book Review, the Washington Post, Ladies' Home Journal, and New Woman. She has been featured on Dateline NBC, Good Morning America, C-SPAN, The Early Show, NPR's "Voice of America," and other radio and television programs.