The Gone Dead: A Novel (Paperback) 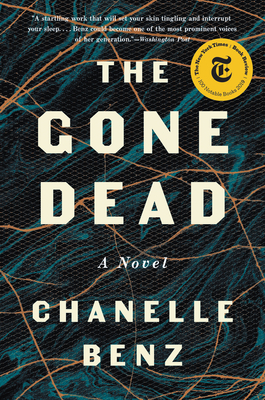 By Chanelle Benz
$16.99
Click Title for IN STOCK Location

Billie James returns to her family's dilapidated home on the Mississippi Delta after being raised by her colorfully eccentric mother. She decides to look closer into the sudden death of her father, a noted African-American poet, when she was only four-years-old. The local authorities don't offer much help and Billie begins to suspect that she is inquiring about an incident that a lot of people would prefer to forget. Both atmospheric and intriguing, this debut novel boasts richly developed characters and, like the murky waters of the river than runs close to Billie's shack, exudes a sense of subtle menace and danger. — Alden Graves

The daughter of a renowned African American poet and a white mother returns to Mississippi 30 years after her father's mysterious death. The Delta hides bodies and secrets, and dredging up memories of a man long-buried carries the risk of provoking fresh violence. — Mike Hare

“Billie James travels to the Mississippi Delta from Philly for the first time since her father’s mysterious death, some 30 years before. Although she was there that night, she has no recollection of the events that occurred, but learns later that she went missing afterwards. This new detail causes her to start digging into what really happened, which gets her into trouble with people who want the past to remain buried. An emotional and tense novel about racism, justice, family, and the truth, Benz’s debut has so much edge to it that I could not stop reading!”
— Carl Kranz, The Fountain Bookstore, Richmond, VA

“The Gone Dead is a haunted mystery set in the ghostly Mississippi Delta, which is not only a setting but a character in this gritty, emotional novel by Chanelle Benz. It’s not hard to get pulled into this suspense novel as Billie returns to her father’s homeland to discover the truth behind his death. She meets all kinds of rundown, enigmatic characters along the way, and discovers herself among the ruins of her past. You will want answers as you enter the minds of the plethora of dubious characters in the fictional, but almost real, town of Greendale.”
— Steve Iwanski, Charter Books, Newport, RI

An electrifying first novel from "a riveting new voice in American fiction" (George Saunders): A young woman returns to her childhood home in the American South and uncovers secrets about her father's life and death

Billie James' inheritance isn't much: a little money and a shack in the Mississippi Delta. The house once belonged to her father, a renowned black poet who died unexpectedly when Billie was four years old. Though Billie was there when the accident happened, she has no memory of that day—and she hasn't been back to the South since.

Thirty years later, Billie returns but her father's home is unnervingly secluded: her only neighbors are the McGees, the family whose history has been entangled with hers since the days of slavery. As Billie encounters the locals, she hears a strange rumor: that she herself went missing on the day her father died. As the mystery intensifies, she finds out that this forgotten piece of her past could put her in danger.

Inventive, gritty, and openhearted, The Gone Dead is an astonishing debut novel about race, justice, and memory that lays bare the long-concealed wounds of a family and a country.

Chanelle Benz has published work in Guernica, Granta.com, The New York Times, Electric Literature, The American Reader, Fence and others, and is the recipient of an O. Henry Prize. Her story collection The Man Who Shot Out My Eye Is Dead was published in 2017 by Ecco/HarperCollins. It was named a Best Book of 2017 by The San Francisco Chronicle and one of Electric Literature’s 15 Best Short Story Collections of 2017. It was also shortlisted for the 2018 Saroyan Prize and longlisted for the 2018 PEN/Robert Bingham Prize for Debut Fiction and the 2017 Story Prize. Her novel The Gone Dead was published by Ecco/HarperCollins in June 2019 and was a New York Times Book Review Editor’s Choice and a Tonight Show Summer Reads Finalist. It was named a best new book of the summer by O, The Oprah Magazine, Time, Southern Living, and Nylon. She currently lives in Memphis where she teaches at Rhodes College.

“Every chapter in The Gone Dead yields a surprise.... Benz’s Delta is portrayed with care and depth.... Her attention to the recurring nature of racism in this country, and her gift for weaving these insights into a gripping narrative, establish Benz as an adept critic and storyteller.”
— New York Times Book Review

“A powerful look at a region constantly haunted by its past.... Benz proved herself to be a master storyteller with her short story collection, and that talent is on full display.... An excellent novel from an author who writes with real grace and a wisdom beyond her years.”
— NPR

“[Benz] captures human interaction with the polish of a seasoned dramatist, armed with a bevy of tools — a feel for smooth dialogue; a rich sense of place; a knowledge of history and its impact on individuals, families, and communities — that charge her words with authenticity.... Note-perfect.”
— Entertainment Weekly

“The past shadows Billie when she goes back to Mississippi after 30 years to extract the truth from the riddle of her father’s death.... A taut, voltaic novel.”
— O, the Oprah Magazine

“Transports readers to the mucky Mississippi delta, where rising humidity and a few probing questions unearth a long-buried crime.... An examination of racial justice and history— and whose versions are accepted as truth.”
— Elle

“Haunting.... The first line of this impressive novel sets the stage for what follows: ‘It is not exactly as she was picturing’.... What follows is an interrogation of memory, race, and the way that stories define our lives.... The novel retains this tension right up to its final pages.“
— Ploughshares

“You can easily read The Gone Dead in a weekend, and you likely will. It grabs hold early with truly compelling characters and a central mystery.... An arresting whodunit, a portrait of an American family, and a Southern narrative that won’t let the past go.”
— Chapter 16

“A rich, arresting exploration of racial injustice and the long shadows cast by family legacy.... Propulsive from the outset, culminating in a wrenching final scene.... A beautiful and devastating portrait of the modern South.”
— Publishers Weekly

“Combines brisk plotting and striking characterization to provide a compelling read. . . . Benz proves her virtuosity as a writer. . . . Gripping.”
— Booklist

“The southern novel will never be the same after this book. Billie James, the protagonist of The Gone Dead, holds more mystery, lyricism, tragedy, nuance than most characters I’ve read in recent years.... Writers were not supposed to be able to do what Benz does in The Gone Dead.”
— Kiese Laymon, author of Heavy

“Chanelle Benz’s prose is remarkable for its acute intelligence, flawless precision, and startling beauty. This wry, soulful novel reads like a thriller but an intimate one; it becomes both a genuine page turner and a deep character study.”
— Dana Spiotta, author of Innocents and Others

“Chanelle Benz has the power and grace to make the quiet stunning and the explosive beautiful. The Gone Dead is a wonderous exploration of pain and confrontation of its sources.”

“Wise and assured, Chanelle Benz’s The Gone Dead plunges the reader into a fraught and complicated homecoming of sorts, the South you return to after a life away, a place you never really knew.... Benz’s prose is insightful and surprising, chock-full of beautiful sentences that demand re-reading.”
— James McLaughlin, author of Bearskin


“I love this novel for many reasons, its fresh look at the hardscrabble Mississippi Delta, its varied voices that form a chorus around its main voice, Billie, and the mystery at its heart.... [The Gone Dead] feels as old and rich as the delta soil on which it happens.”
— Tom Franklin, author of Crooked Letter, Crooked Letter