Queer, There, and Everywhere: 23 People Who Changed the World (Paperback) 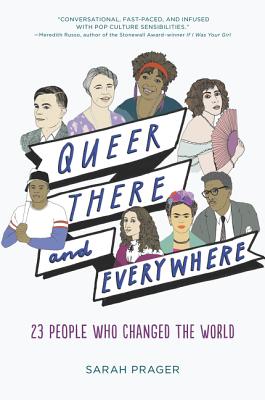 From obscure figures (Elagabalus) to the well-known (Eleanor Roosevelt); from the iconic (George Takei) to the surprising (Abraham Lincoln!), this book features several queer persona who have had an immense influence on our history. Complete with a helpful glossary of terminology, this is a great read for kids and adults alike to understand how normal and ancient is the tradition of queer and trans* people. — Katelynne Shimkus

World history has been made by countless lesbian, gay, bisexual, transgender, and queer individuals—and you’ve never heard of many of them.

Queer author and activist Sarah Prager delves deep into the lives of 23 people who fought, created, and loved on their own terms. From high-profile figures like Abraham Lincoln and Eleanor Roosevelt to the trailblazing gender-ambiguous Queen of Sweden and a bisexual blues singer who didn’t make it into your history books, these astonishing true stories uncover a rich queer heritage that encompasses every culture, in every era.

By turns hilarious and inspiring, the beautifully illustrated Queer, There, and Everywhere is for anyone who wants the real story of the queer rights movement.

Sarah Prager is a writer, activist, and speaker on LGBTQ+ history. Her widely praised first book on the subject, Queer, There, and Everywhere: 23 People Who Changed the World, received numerous accolades, including three starred reviews and being named a Best Book for Teens by the New York Public Library and Chicago Public Library. Her second book, Rainbow Revolutionaries: 50 LGBTQ+ People Who Made History, is for ages 8–12. Prager's writing has appeared in The Atlantic, HuffPost, and many other publications. She has presented on this topic to over 130 groups across five countries, including the U.S. Embassy in Mexico City. Prager also created Quist, a free mobile app for learning LGBTQ+ history, in 2013 and was invited to the White House to contribute on LGBTQ+ tech issues in 2014. Prager lives with her wife and their children in Massachusetts.

★ “Should be placed in the hands of every LGBTQ teen so they’ll know that not only are they not alone, but they have a rich and diverse history. Presented in a breezy, conversational tone that will engage teens and make them laugh.” — Kirkus Reviews (starred review)

★ “Prager delivers a rich exploration of gender identity and sexuality across time and nation…These snapshots—sometimes irreverent in tone, but always respectful of the people and relationships they discuss—offer strong insight into the lives of individuals who broke barriers or simply lived life on their own terms.” — Publishers Weekly (starred review)

★ “Written with a pop culture sensibility that will appeal to teen readers, the collection is a fascinating look at history through a different lens than what most history books provide. Hurray for Sarah Prager’s own splendid contribution to queer history!” — Shelf Awareness

“A lively and informative introduction to queer history.” — Booklist

“Well written, timely, and interesting; the profiles include a thoughtful, varied mix of queer historical figures .... Prager has captured moments from thousands of years of queer history-making in a captivating, illuminating read.” — Voice of Youth Advocates (VOYA)

“Queer, There, and Everywhere is so conversational, fast paced, and infused with pop culture sensibilities that it tricks you into forgetting it’s a series of (incredibly timely) biographies. An absolute must-read for people interested in their queer forebears.” — Meredith Russo, author of the Stonewall Award winner If I Was Your Girl

“Accessible, irreverent, and meticulously researched, at times heartbreaking and just as often wildly funny, this stunningly diverse survey of queer histories is a nourishing and inspiring addition to our arsenal of queer possibilities. Should be required reading for all of us, queer or not.” — Sarah McCarry, author of the Lambda Award-nominated About a Girl

“Wow. It isn’t easy to tell stories from across time and space of lives we would now call queer. Much less in an I-can’t-put-this-book-down way. Sarah Prager has done it, showing us all how to ‘live bravely.’” — Leila J. Rupp, author of Sapphistries: A Global History of Love between Women, co-editor of Understanding and Teaching U.S. Lesbian, Gay, Bisexual, and Transgender History and professor at UC Santa Barbara

“Reading this book is like discussing history with a really good (and really smart) friend—free of pretentiousness, full of wisdom, dispatched in a casual, but informative way. Queer, There, and Everywhere is a desperately needed and absolutely brilliant breath of fresh air. A must-read!” — Shane Bitney Crone, activist and producer/subject of the Bridegroom documentary

“Sarah Prager tells us 23 fascinating stories, some of them new twists on familiar ones (like Abraham Lincoln) as well as ones about figures that history has nearly forgotten (like the Roman Emperor Elagabalus), mixing light-hearted humor with impeccable scholarship.” — Kevin Jennings, founder of GLSEN, former Assistant Deputy Secretary of the US Department of Education, and author of Becoming Visible

“A powerful, educational book about the lives of 23 LGBTQ people who made important contributions to our society. This is an essential tool to educate the world about our LGBTQ heroes and leaders.” — Jose Gutierrez, founder of the Latino GLBT History Project and co-founder of the Rainbow History Project

“In this delightful and accessible book, Prager introduces us to a wide and diverse assortment of 23 historical figures who challenged the gender and/or sexuality norms of their time and place and changed the world. I enjoyed every story.” — Robyn Ochs, educator and co-editor of Getting Bi: Voices of Bisexuals around the World

“This is a great book about some remarkable people who show us the actual diversity of real life. Gender isn’t nearly as straightforward as most people pretend it is!” — Dr. Susan Stryker, author of Transgender History and co-director of the Emmy-winning film Screaming Queens: The Riot at Compton’s Cafeteria