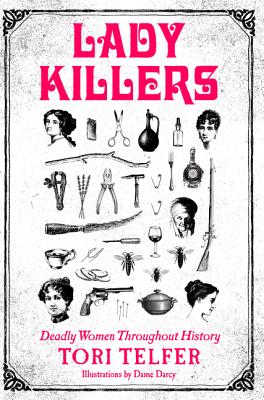 By Tori Telfer
$16.99
Click Title for IN STOCK Location

The Green River Killer, the Son of Sam, the Unibomber, Ted Bundy, Jack the Ripper. For too long the list of Epic Villains has been dominated by men. Lizzie Borden, after all, can only be credited with two murders and a good lawyer. This fascinating expose offers a compelling argument that the female sex can be every bit as lethal as its male counterpart. The overriding message seems to be that, if you have any suspicions at all about the woman who is offering you a brownie, feed a bit of it to the dog before you take a bite. — Alden Graves

When you think of serial killers throughout history, the names that come to mind are ones like Jack the Ripper, John Wayne Gacy, and Ted Bundy. But what about Tillie Klimek, Moulay Hassan, Kate Bender? The narrative we’re comfortable with is the one where women are the victims of violent crime, not the perpetrators. In fact, serial killers are thought to be so universally, overwhelmingly male that in 1998, FBI profiler Roy Hazelwood infamously declared in a homicide conference, “There are no female serial killers.”

Lady Killers, based on the popular online series that appeared on Jezebel and The Hairpin, disputes that claim and offers fourteen gruesome examples as evidence. Though largely forgotten by history, female serial killers such as Erzsébet Báthory, Nannie Doss, Mary Ann Cotton, and Darya Nikolayevna Saltykova rival their male counterparts in cunning, cruelty, and appetite for destruction.

Each chapter explores the crimes and history of a different subject, and then proceeds to unpack her legacy and her portrayal in the media, as well as the stereotypes and sexist clichés that inevitably surround her. The first book to examine female serial killers through a feminist lens with a witty and dryly humorous tone, Lady Killers dismisses easy explanations (she was hormonal, she did it for love, a man made her do it) and tired tropes (she was a femme fatale, a black widow, a witch), delving into the complex reality of female aggression and predation. Featuring 14 illustrations from Dame Darcy, Lady Killers is a bloodcurdling, insightful, and irresistible journey into the heart of darkness.

Tori Telfer is the author of Lady Killers: Deadly Women Throughout History and the host of the podcasts Criminal Broads, Why Women Kill: Truth, Lies, and Labels (CBS All Access), and Red Flags (Investigation Discovery). She lives in New York City with her husband and son.

“Telfer proves that you can stab, poison, and suffocate the predictable tropes about female killers and still write something salacious and entertaining.”
— Caitlin Doughty, New York Times bestselling author of Smoke Gets In Your Eyes and From Here to Eternity

“A fascinating, creepy and insightful read that will make you question everything you think you know about the supposedly fairer sex.”
— Mara Altman, author of Thanks For Coming and Gross Anatomy

“With a breezy tone and sharp commentary, Telfer draws out the tired stereotypes with just enough wit and humor to make the topic of female murderers enjoyable.”
— Publishers Weekly

“The book is well-researched and informative, but squeamish readers beware: Telfer doesn’t hide the grisly and gruesome details about what these women did to the people they murdered... Heavily researched and filled with gory details, a rare look at women who killed for pleasure.”
— Kirkus Reviews

“The chapters are well researched, and even when they start out reciting myth and legend (e.g., “The Blood Countess: Erzsébet Báthory”), Telfer goes on to deconstruct the legend and look for realism and fact behind the rumors, which is refreshing.... [Telfer] seriously interrogates the treatment these women received at the time of their crimes as well as afterward, shining light on how each case was handled. For true crime fans and those interested in feminist history.”
— Library Journal

“Think serial killers are always male? This creepy, darkly humorous compendium of real-life tales will sho you otherwise—and keep you up at night”
— People