Blood, Bullets, and Bones: The Story of Forensic Science from Sherlock Holmes to DNA (Paperback) 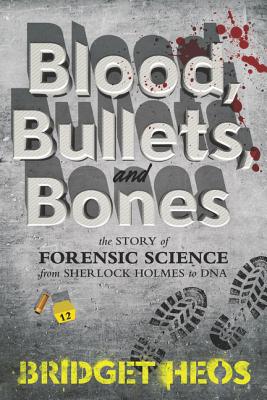 Blood, Bullets, and Bones provides young readers with a fresh and fascinating look at the ever-evolving science of forensics.

Since the introduction of DNA testing, forensic science has been in the forefront of the public’s imagination, thanks especially to popular television shows like CSI: Crime Scene Investigation. But forensic analysis has been practiced for thousands of years. Ancient Chinese detectives studied dead bodies for signs of foul play, and in Victorian England, officials used crime scene photography and criminal profiling to investigate the Jack the Ripper murders. In the intervening decades, forensic science has evolved to use the most cutting-edge, innovative techniques and technologies.

In this book, acclaimed author Bridget Heos uses real-life cases to tell the history of modern forensic science, from the first test for arsenic poisoning to fingerprinting, firearm and blood spatter analysis, DNA evidence, and all the important milestones in between. By turns captivating and shocking, Blood, Bullets, and Bones demonstrates the essential role forensic science has played in our criminal justice system.

★ “Sherlock Holmes lovers, CSI: Miami aficionados, and forensic science students will all be drawn to this rather gruesome yet highly entertaining and fact-packed history.” — School Library Journal (starred review)

“Punctuated by fascinating photos, a smattering of educational asides, and astute pop-culture references (Dexter, Les Misérables, The Silence of the Lambs), and followed by a glossary of key terms, this is sure to appeal to wannabe FBI agents, budding history buffs, “armchair detectives,” and everyone in between.” — Booklist

“Heos’s conversational text is forthright with the (sometimes disturbing) facts, but never sensationalized—keeping the focus squarely on the fascinating science.” — Horn Book Magazine

“For teens who haven’t ventured much beyond CSI, this will prove a solid and entertaining introduction to a compelling subject.” — Bulletin of the Center for Children’s Books

“A fascinating account of the history of forensic investigation from ancient times to the modern age, this easy-to-read, concise volume is by turns horrifying, amusing, and enlightening. Libraries serving young adults should definitely have this in their collections for fans of mysteries, science, and history.” — Voice of Youth Advocates (VOYA)