Your Song Changed My Life: From Jimmy Page to St. Vincent, Smokey Robinson to Hozier, Thirty-Five Beloved Artists on Their Journey and the Music That Inspired It (Paperback) 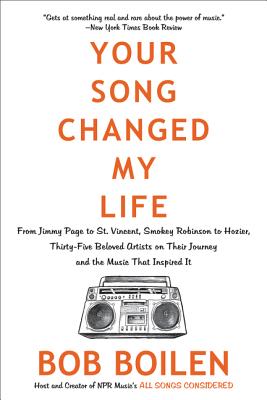 By Bob Boilen
$16.99
Click Title for IN STOCK Location

From NPR's All Songs Considered, Boilen has a lot of experience interviewing musicians. Here, he has collected the formative songs of some major artists. It's so cool to read and learn about what your favorite musicians listen to! — Chris Linendoll

From the beloved host and creator of NPR’s All Songs Considered and Tiny Desk Concerts comes an essential oral history of modern music, told in the voices of iconic and up-and-coming musicians, including Dave Grohl, Jimmy Page, Michael Stipe, Carrie Brownstein, Smokey Robinson, and Jeff Tweedy, among others—published in association with NPR Music.

Is there a unforgettable song that changed your life?

For Wilco’s Jeff Tweedy, it was discovering his sister’s 45 of The Byrds’ “Turn, Turn, Turn.” A young St. Vincent’s life changed the day a box of CDs literally fell off a delivery truck in front of her house. Cat Stevens was transformed when he heard John Lennon cover “Twist and Shout.” These are the momentous yet unmarked events that have shaped these and many other musical talents, and ultimately the sound of modern music.

A diverse collection of personal experiences, both ordinary and extraordinary, Your Song Changed My Life illustrates the ways in which music is revived, restored, and revolutionized. It is also a testament to the power of music in our lives, and an inspiration for future artists and music lovers.

Bob Boilen is the creator and host of NPR Music’s All Songs Considered, and of their Tiny Desk Concert series, which hosts well-known and emerging artists for intimate performances filmed at his desk. He was also the director of NPR’s All Things Considered (1989-2007) and chose the music between the news stories. As a composer and musician himself, Boilen has always been passionate about music. Prior to joining NPR, he was a long-time record store clerk and performed with his band Tiny Desk Unit. Constantly on the lookout for new music, Boilen sees more than 500 live bands each year. He lives in Washington, D.C.

“Bob Boilen’s book gets at something real and rare about the power of music.”
— New York Times Book Review

“Part memoir, part criticism, and part music history . . . With Your Song Changed My Life [Bob Boilen confirms] that he’s one of the most versatile—and most fascinating—music writers working today. A”
— Entertainment Weekly

“NPR’s music guru asks dozens of artists about songs that inspired them. The answers are surprising and illuminating, and the roster of contributors is great.”
— Billboard, Spring Music Book Preview

“You might know Bob Boilen as the co-host of NPR’s “All Songs Considered”—probably the most popular and influential radio show and podcast about music. . . . [his] new book, Your Song Changed My Life is fascinating to music fans of all stripes.”
— Omaha World-Herald

“NPR music host Bob Boilen . . . throws a touch of charming memoir atop interviews with 35 musicians who share how they got turned on to music.”
— THE WEEK

“Boilen clearly loves his job and loves musicians, and this good-naturedness comes through in Your Song Changed My Life. It’s a short geek-out of a music book . . . [and] the best part is the surprise factor.”
— LA Weekly

“Since 2000, Boilen, creator and host of NPR’s All Songs Considered, has featured new and established singers of all genres on his popular online music show and . . . [his] warm, engaging voice pervades this treat for music aficionados.”
— Kirkus Reviews (starred review)

“Bob Boilen’s Your Song Changed My Life . . . is [a] conversational oral history, and given the breadth of contributors, it’s one you’ll be able to pick up repeatedly to grab a slice of which songs influence some excellent artists.”
— Irish Times

“Entertaining and moving, evoking emotions as diverse as the artists Boilen interviews. Each vignette is constructed with obvious love and dedication . . . gentle, intimate, funny and, at times, heartbreaking.”
— Daily Californian

“Equal parts touching, surprising, and inspiring . . . Boilen’s book could be a delightfully quick read, [but] you are better off rewarding yourself with due diligence.”
— The Nerdist