The Book of You: A Novel (Hardcover) 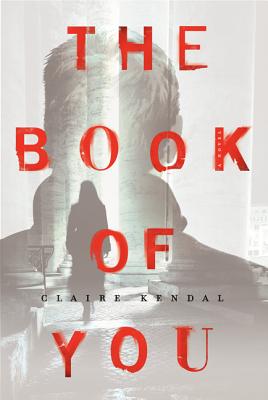 This book was so well-written, so realistic, and so twisted that I was immediately plunged into Clarissa's personal hell of her living her life avoiding becoming an object of desire to a stalker. Random routes to jury duty, different departure times to catch the train, changing her phone number, nothing is stopping Rafe from following Clarissa's every move and it's slowly pushing her over the edge of anxiety into madness. The police are no help - they need solid proof that he is a threat - and thus begins Clarissa's thorough and obsessive notation and collection of every personal violation he has committed against her that include unwanted gifts, death roses, love letters and texts, ringing her doorbell incessantly, threats, assaults, and the promise to Clarissa that "No other man can do to you what I can. No other man will love you like I do. . . . ".

It's a fast and disturbing read that makes your heart race and the back of your neck prickle. A read that makes you look over your shoulder and your breath catch in your throat, a work of fiction that is so accurate in its depiction of the lengths a person must go for legal protection that it is made all the more terrifying with a shocking ending that simultaneously broke my heart and allowed me a sigh of relief that it was over. Want to go for a ride on an emotional roller coaster? Read this book.

A mesmerizing tale of psychological suspense about a woman who must fight to escape an expert manipulator determined to possess her, Claire Kendal’s debut novel is a sophisticated and disturbing portrait of compulsion, control, and terror that will appeal to fans of Before I Go to Sleep, The Silent Wife, and Into the Darkest Corner.

His name is Rafe, and he is everywhere Clarissa turns. At the university where she works. Her favorite sewing shop. The train station. Outside her apartment. His messages choke her voice mail; his gifts litter her mailbox. Since that one regrettable night, his obsession with her has grown, becoming more terrifying with each passing day. And as Rafe has made clear, he will never let her go.

Clarissa’s only escape from this harrowing nightmare is inside a courtroom—where she is a juror on a trial involving a victim whose experiences eerily parallel her own. There she finds some peace and even makes new friends, including an attractive widower named Robert, whose caring attentions make her feel desired and safe. But as a disturbingly violent crime unfolds in the courtroom, Clarissa realizes that to survive she must expose Rafe herself. Conceiving a plan, she begins collecting the evidence of Rafe’s madness to use against him—a record of terror that will force her to relive every excruciating moment she desperately wants to forget. Proof that will reveal the twisted, macabre fairy tale that Rafe has spun around them . . . with an ending more horrifying than her darkest fears.

Masterfully constructed, filled with exquisite tension and a pervasive sense of menace, The Book of You explores the lines between love and compulsion, fantasy and reality, and offers a heart-stopping portrait of a woman determined to survive. Claire Kendal’s extraordinary debut will haunt readers long after it reaches its terrifying, breathtaking conclusion.

Claire Kendal was born in America and educated in England, where she has spent all her adult life. Her first novel, The Book of You, was translated into more than twenty languages. Claire teaches English literature and creative writing, and lives in England’s South West region with her family.

“Minutes after you dip into Kendal’s novel you’ll know what it’s like to be a woman who’s being stalked—and by the end, your heart will thump and your shirt will get clammy with nervous sweat.”
— Entertainment Weekly, Editor’s Pick

“An engrossing literary thriller…. The author (who lectures in English literature and creative writing) uses the more violent and sadistic aspects of fairy tales…to explore modern relationships…. As grimly seductive as any of its inspirational sources.”
— Los Angeles Times

“Kendal’s debut novel is a palpitating tale of obsession and dangerously unrequited love. Fans of Gone Girl and The Silent Wife will enjoy the delectable tension right up until the heart-stopping conclusion.”
— Library Journal (starred review)

“Kendal uses her writing skills to fine advantage, both in creating Clarissa’s evidentiary journal, which she hopes will help nail Rafe, and in chronicling Rafe’s growing menace….Nicely written.”
— Kirkus Reviews

“Kendal expertly heightens the suspense while offering a disturbing portrait of a clever stalker who believes himself to be in love.”
— Booklist

“The Book of You is a frighteningly intimate—and accurate—portrayal of stalking. Through Clarissa’s eyes, we see the ragged nerves, sleepless nights and paranoia brought about by Rafe’s ‘romantic’ obsession. First-time author Claire Kendal draws readers into a taut, compulsively readable tale of pursuit and escape.”
— BookPage

“Your stomach will be in knots before the end of the first chapter of Kendal’s debut novel.”
— San Antonio Express-News

“Claire Kendal makes a smashing debut with the…The Book of You.…most readers [will] finish the brilliantly constructed novel in one or two sittings.”
— Connecticut Post, #FridayReads

“A gripping tale, well-written and cleverly plotted...[that] demonstrates vividly how destructive [stalking] can be.”
— Literary Review

“The Book of You starts with breathtaking brilliance and then just gets better with every page.... [It] is already my book of the year.”
— Elizabeth Haynes, New York Times bestselling author of Into the Darkest Corner

“Chilling, raw, and utterly addictive, The Book of You is the kind of psychological thriller that you will want to read in one gulp, only to find yourself terrified once the lights are off.”
— Alafair Burke, New York Times bestselling author of If You Were Here

“I literally hardly breathed as I raced to the end. It’s a terrifying thriller…so addictive.”
— Samantha Hayes, author of Until You’re Mine