They All Love Jack: Busting the Ripper (Hardcover) 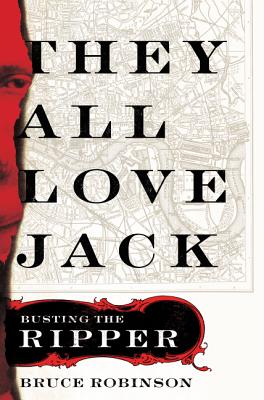 By Bruce Robinson
$35.00
Hard to Find - May no longer be available

If you only read one book in your life about London's Autumn of Terror in 1888, this is it! Not so much a recreation of the nefarious career of Jack the Ripper as an indictment of the rigidly structured, profoundly corrupted society in which he practiced his butchery. Astonishingly well-researched and written with a pen dipped in the deepest black. — Alden Graves

The iconoclastic writer and director of the revered classic Withnail & I—"The funniest British film of all time" (Esquire)—returns to London in a decade-long examination of the most provocative murder investigation in British history, and finally solves the identity of the killer known as "Jack the Ripper."

In a literary high-wire act reminiscent of both Hunter S. Thompson and Errol Morris, Bruce Robinson offers a radical reinterpretation of Jack the Ripper, contending that he was not the madman of common legend, but the vile manifestation of the Victorian Age's moral bankruptcy.

In exploring the case of Jack the Ripper, Robison goes beyond the who that has obsessed countless others and focuses on the why. He asserts that any "gentlemen" that walked above the fetid gutters of London, the nineteenth century's most depraved city, often harbored proclivities both violent and taboo—yearnings that went entirely unpunished, especially if he also bore royal connections. The story of Jack the Ripper hinges on accounts that were printed and distributed throughout history by the same murderous miscreants who frequented the East End of her Majesty's London, wiping the fetid muck from their boots when they once again reached the marble floors of society's finest homes.

Supported by primary sources and illustrated with 75 to 100 black and white photographs, this breathtaking work of cultural history dismisses the theories of previous "Ripperologists." A Robinson persuasively makes clear with his unique brilliance, The Ripper was far from a poor resident of Whitechapel . . . he was a way of life.

Bruce Robinson is the director and screenwriter of Withnail & I, How to Get Ahead in Advertising, Jennifer 8, and The Rum Diary. He has also written the screenplays for The Killing Fields, Shadow Makers (released in the US as Fat Man and Little Boy), Return to Paradise, and In Dreams. He is the author of The Peculiar Memories of Thomas Penman, Paranoia in the Launderette, and two books for children, The Obvious Elephant and Harold and the Duck, both illustrated by Sophie Windham. He lives in London.

“Robinson’s achievement isn’t in revealing the Ripper but in writing the most involving, audacious, and wonderfully bonkers book of the year.”
— Irish Times

“A strange, mind-boggling mixture…. Anyone coming blind to the book might think it a collaboration between Dr. David Starkey and Johnny Rotten.”
— Mail on Sunday

“Over the years, the figure of the Ripper has become commodified: a cartoon-like Victorian cheeky chappy who kills with a twinkle in his eye. Robinson reclaims the identity and humanity of the victims, and ensures that nobody who reads this remarkable book will ever forget the true circumstances of these crimes. Whether the Ripper was or was not Michael Maybrick, They All Love Jack performs a most valuable moral service.”
— The Daily Telegraph

“Rarely has a book on Jack the Ripper been written with such visceral anger: anger at Jack, at ‘Ripperology’, at the establishment, and anger at the police cover-up that allowed one of the world’s most infamous serial killers to remain free…Robinson’s…research is undoubtedly impressive…. A bloody good read.”
— The Guardian