The Book of Eating: Adventures in Professional Gluttony (Hardcover) 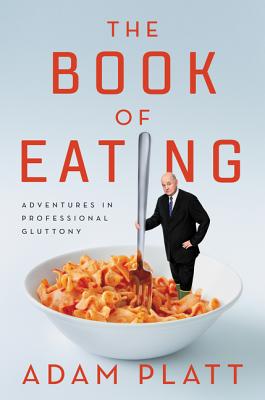 As the son of a diplomat growing up in places like Hong Kong, Taiwan, and Japan, Adam Platt didn’t have the chance to become a picky eater. Living, traveling, and eating in some of the most far-flung locations around the world, he developed an eclectic palate and a nuanced understanding of cultures and cuisines that led to some revelations which would prove important in his future career as a food critic. In Tokyo, for instance—“a kind of paradise for nose-to-tail cooking”—he learned that “if you’re interested in telling a story, a hair-raisingly bad meal is much better than a good one."

From dim sum in Hong Kong to giant platters of Peking duck in Beijing, fresh-baked croissants in Paris and pierogi on the snowy streets of Moscow, Platt takes us around the world, re-tracing the steps of a unique, and lifelong, culinary education. Providing a glimpse into a life that has intertwined food and travel in exciting and unexpected ways, The Book of Eating is a delightful and sumptuous trip that is also the culinary coming-of-age of a voracious eater and his eventual ascension to become, as he puts it, “a professional glutton.”

Adam Platt has been a contributing editor and restaurant critic for New York magazine since 2000. He won the James Beard Foundation Journalism Award for Restaurant Reviews in 2010. During the course of nearly twenty-five years in the magazine business, Platt has written for a variety of publications, including The New Yorker, The New York Observer, Esquire, and Condé Nast Traveler. He lives in Greenwich Village with his wife and two pizza-loving daughters.

“Gastronomes and fans of Platt will savor this behind-the-scenes look at real life as a restaurant critic in the big city.”
— Publishers Weekly

“...[An] entertaining and honest account of restaurant journalism, and a life worth exploring.”
— Booklist

“A timely and delectable smorgasbord of dishes and dishing…this honest, revealing and funny book is as deeply pleasurable as the soup dumplings Platt learned to love as a boy.”
— New York Times Book Review