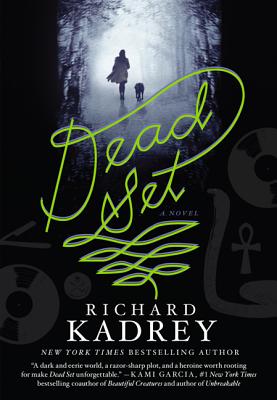 By Richard Kadrey
$22.99
Hard to Find - May no longer be available

What would you give to see a dead loved one? A tooth? A blood drop? Zoe desperately misses her father and will do anything to be sure his soul is at rest. She is a heroine to gnaw our nails to the quick over. From the author of the Sandman Slim series. — Sarah Donner

After her father's funeral, Zoe moved to the big city with her mother to start over. But change always brings trials, and life in the city is not so easy. Money is tight, and Zoe's only escape, as has always been the case, is in her dreams—a world apart from her troubled real life where she can spend time with her closest companion: her lost brother, Valentine.

But something or someone has entered their dreamworld uninvited. And a chance encounter at a used record store, where the vinyl holds not music but lost souls, has opened up a portal to the world of the restless dead. It's here that the shop's strange proprietor offers Zoe the chance to commune with her dead father. The price? A lock of hair. Then a tooth. Then . . .

Richard Kadrey is the New York Times bestselling author of the Sandman Slim supernatural noir books. Sandman Slim was included in Amazon’s “100 Science Fiction & Fantasy Books to Read in a Lifetime,” and is in development as a feature film. Some of his other books include The Wrong Dead Guy, The Everything Box, Metrophage, and Butcher Bird. He also writes the Vertigo comic Lucifer.

“A dark and eerie world, a razor sharp plot, and a heroine worth rooting for make DEAD SET unforgettable.”
— Kami Garcia

“If punk and underworld mythology got into the mosh pit, it would come out something like this book; spiky and pretty with lashings of black eyeliner and its heart tattooed on its sleeve.”
— Lauren Beukes

“A fantastic supernatural horror novel with deep punk roots ... Kadrey’s underworld is a gloomy mirror of the overworld with all its injustice and broken dreams, and Zoe’s battle with her fear and her honorable spirit put her in enough jeopardy for six novels.
— Cory Doctorow, Boing Boing

“Kadrey again has painted a world that draws you in with its mysterious, yet frightening, beauty…The imagery is just phenomenal.”
— Crimespree Magazine

“An intelligent stand-alone tale of quiet horror that should appeal to Kadrey’s many fans, as well as to lovers of more subtle shivers.”
— Library Journal

“This bittersweet and elegaic fantasy will appeal to both fantasy fans and mainstream readers.”
— Publishers Weekly

“A tender, if terrifying, story of a lost teenager trying to find her way.”
— Los Angeles Times