The Wedding Band: A Save the Date Novel (Mass Market) 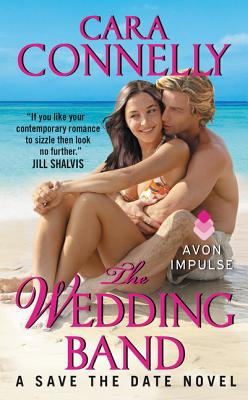 Fans of Rachel Gibson and Jennifer Ryan can rejoice in Cara Connelly's Save the Date series.

It's the most secretive celebrity wedding of the year, and Christine Case is going to be there!

No-nonsense journalist Christine Case still believes a newspaper should inform, not entertain. But when Chris's biggest story blows up in her face, she's out of a job unless she does the one thing she's sworn never to do—infiltrate a celebrity wedding and write an exposé on the happy couple.

A-list heartthrob Dakota Rain loathes the press. So when he hosts his equally famous brother's wedding at his Beverly Hills estate, keeping the vultures at bay is Dakota's top priority—until he meets the sultry singer in the wedding band.

Posing as a singer is no problem for Chris, but when Dakota talks her into a private-island getaway, the hot days—and sizzling nights—make it impossible to go on deceiving him. But what will happen when the media-hating movie star discovers the woman he's falling for is really an undercover reporter?

Award-winning author Cara Connelly writes sexy romantic comedies featuring smart sassy women and the hot alpha men who love them. Her internationally bestselling Save the Date series has been described as “emotionally complex,” “intensely passionate,” and “laugh out loud hilarious.”

A recovering attorney, Cara recently relocated to Florida with her rock ‘n roll husband Billy and their blue-eyed rescue dog Bella. Catch up with her at www.CaraConnelly.com, sign up for her news, and follow her on Bookbub, Goodreads, Facebook and Instagram.

“If you like your contemporary romance to sizzle than look no further.”
— Jill Shalvis, New York Times bestselling author

“Dakota and Christine are exceedingly complex characters [...] and their journey on their road to love makes for a most fascinating read.Cara Connelly’s stellar writing never ceases to amaze!”
— Fresh Fiction

“The third book in Connelly’s ever-surprising, sure-to-please Save the Date series whisks readers into another sensual, smart romance [...] The result is a battle of wits that remains thoroughly unique and ultimately quite satisfying.”
— RT Book Reviews