The Survivors: A Story of War, Inheritance, and Healing (Paperback) 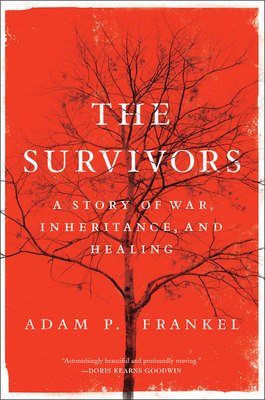 A memoir of family, the Holocaust, trauma, and identity, in which Adam Frankel, a former Obama speechwriter, must come to terms with the legacy of his family’s painful past and discover who he is in the wake of a life-changing revelation about his own origins.

“The Survivors is an astonishingly beautiful and profoundly moving book.  Frankel’s haunting search to unravel the mysteries of his family is so compelling that it reads like a fine novel.” –Doris Kearns Goodwin

Adam Frankel’s maternal grandparents survived the Holocaust and built new lives, with new names, in Connecticut. Though they tried to leave the horrors of their past behind, the pain they suffered crossed generational lines—a fact most apparent in the mental health of Adam’s mother. When Adam sat down with her to examine their family history in detail, he learned another shocking secret, this time one that unraveled Adam’s entire understanding of who he is.

In the midst of piecing together a story of inherited familial trauma, Adam discovered he was only half of who he thought he was, knowledge that raised essential questions of identity. Who was he, if not his father’s son? If not part of a rich heritage of writers and public servants? Does it matter? What defines a family’s bonds? What will he pass on to his own children? To rewrite his story in truth and to build a life for his own young family, Adam had to navigate his pain to find answers and a way forward.

Throughout this journey into the past, his family’s psyche, and his own understanding of identity, Adam comes to realize that while the nature of our families’ traumas may vary, each of us is faced with the same choice. We can turn away from what we’ve inherited—or, we can confront it, in the hopes of moving on and stopping that trauma from inflicting pain on future generations. The stories Adam shares with us in The Survivors are about the ways the past can haunt our future, the resilience that can be found on the other side of trauma, and the good that can come from things that are unspeakably bad.

Adam P. Frankel is an advisor to Emerson Collective, a social change organization. He was a speechwriter for President Barack Obama from the 2008 presidential campaign through Obama’s first term in the White House. Adam is a graduate of Princeton University and the London School of Economics, where he was a Fulbright Scholar. He lives in New York City.

"The Survivors considers three generations of a family and the author's own search for identity.... In processing his feelings, [Frankel] finds himself betraying family secrets, stirring anxieties that haven’t yet fully subsided. But, in the end, he discovers something wonderful: that the people he most treasured were even more loving than he had dared imagine.”  — Chicago Tribune

"Frankel could have written several books from all this rich material." — Washington Post

“Frankel was part of Barack Obama’s speechwriting team from the beginning of Obama’s presidential campaign through his first term in the White House. But Frankel’s memoir, while it offers glimpses of his interactions with Obama and of his time in government, is about something far more personal than his career....Through the rest of the book, Frankel explores the impact of his grandparents’ experiences on his mother and has to confront a revelation about his parents that changes his understanding of his own identity.”  — New York Times Book Review

“…Frankel discovered the difference between the bond of blood and the beauty of love…a personal and painful story…a restorative pathway to understanding, acceptance, forgiveness and love.” — The Times of Israel

“By the end of The Survivors, we understand that the title includes Frankel himself. His survival comes at a steep price: betraying family secrets, stirring anxieties that haven’t yet fully subsided. To his credit, Frankel manages to make us shed genuine tears along the way – not because human nature is perfidious but because, sometimes, it can be good.” — Forward

“A unique addition to the literature of personal accounts that keep the memory of the Holocaust alive at a time when it is ‘getting harder to teach young people about [it] because the most compelling instructors—survivors—are all passing away.’ An emotionally powerful multigenerational memoir.” — Kirkus Reviews

“ The stories Adam shares with us in THE SURVIVORS are about the ways the past can haunt our future, the resilience that can be found on the other side of trauma, and the good that can come from things that are unspeakably bad. ” — Bookreporter.com

“Readers of biography, history, and politics, and those interested in the effects of trauma on subsequent generations, will appreciate this thoughtful book.” — Library Journal

“I was blown away by The Survivors. Totally. And I promise you will be, too. It’s a wrenching, liberating, and exhilarating emotional journey through the darkest and most nurturing of all forests: family. Beautifully written and emotionally fearless, The Survivors made me cry at the end.” — Walter Isaacson

“The Survivors is an astonishingly beautiful and profoundly moving book.  Frankel’s haunting search to unravel the mysteries of his family is so compelling that it reads like a fine novel.” — Doris Kearns Goodwin

“At once heart-wrenching and grippingly suspenseful, Adam Frankel’s memoir explores, in immensely personal terms, the legacy of the Holocaust, as well as the sorrow, grit, and character of his loved ones who survived it. By sharing his own struggle to confront the secrets of the past, Frankel above all illuminates the transcendent, world-changing power of family love.” — Samantha Power

“Adam Frankel has brought us a lovely, stark, powerful, beautifully written, revelatory and deeply emotional memoir with a historical framework that extends from the Holocaust to John F. Kennedy and the world of Barack Obama.  Frankel’s breathtaking book has many important lessons for all of us and deserves to be widely read.” — Michael Beschloss