Warriors of the Storm: A Novel (Saxon Tales #9) (Hardcover) 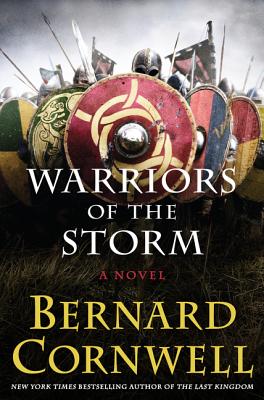 By Bernard Cornwell
$27.99
Hard to Find - May no longer be available

This is book number 9 in the Saxon Tales series.

The ninth installment of Bernard Cornwell’s bestselling series chronicling the epic saga of the making of England, “like Game of Thrones, but real” (The Observer, London)—the basis for The Last Kingdom, the hit BBC America television series.

A fragile peace reigns in Wessex, Mercia and East Anglia. King Alfred’s son Edward and formidable daughter, Aethelflaed, rule the kingdoms. But all around the restless Northmen, eyeing the rich lands and wealthy churches, are mounting raids.

Uhtred of Bebbanburg, the kingdoms’ greatest warrior, controls northern Mercia from the strongly fortified city of Chester. But forces are gathering against him. Northmen allied to the Irish, led by the fierce warrior Ragnall Ivarson, are soon joined by the Northumbrians, and their strength could prove overwhelming. Despite the gathering threat, both Edward and Aethelflaed are reluctant to move out of the safety of their fortifications. But with Uhtred’s own daughter married to Ivarson’s brother, who can be trusted?

In the struggle between family and loyalty, between personal ambition and political commitment, there will be no easy path. But a man with a warrior’s courage may be able to find it. Such a man is Uhtred, and this may be his finest hour.

BERNARD CORNWELL is the author of the acclaimed New York Times bestselling Saxon Tales series, which includes The Last Kingdom, The Pale Horseman, Lords of the North, Sword Song, The Burning Land, Death of Kings, The Pagan Lord, and, most recently, The Empty Throne and Warriors of the Storm, and which serves as the basis for the hit television series The Last Kingdom. He lives with his wife on Cape Cod and in Charleston, South Carolina.

“Bernard Cornwell does the best battle scenes of any writer I’ve ever read, past or present.”
— George R.R. Martin

“Gripping, exciting, and engaging. It is another great read from the masterful author. . . . A Cornwell novel is always full of suspense, and this one is no different. Time after time the suspense is intense. It will have you on the edge of your seat.”
— New York Journal of Books

“For those who are looking for something akin to ‘Game of Thrones’ on HBO or in George R.R. Martin’s novels on which it is based, you can’t go wrong with Cornwell’s tales of Saxons in the years before Britain became England.”
— Oklahoman

“’Warriors’ may be the best in the ‘Saxon Tales’ series yet…. Cornwell’s informative stories are told with appealing imagination to reveal the complicated, lengthy history of England’s formation.”
— San Antonio Express

“Moves from one spectacular battle to the next…. The tangled politics and social mores of the day are intricately interwoven into the plot, placing the frenzied action firmly into historical context.”
— Booklist

“Cornwell again offers an exciting and tricky retelling of history from the standpoint of a colorful warrior lord. Historical fiction fans, especially of this period, as well as viewers of BBC America’s The Last Kingdom (based on this series) will want to read the entire set.”
— Library Journal

“As usual, Cornwell’s research gives the book veracity, and his rendering of the tale from Uthred’s point of view allows immersion into the complex story of how disparate kingdoms became England. Cornwell’s latest is often bloody, sometimes ribald, but always smartly done.”
— Kirkus

“Gripping….One of his great gifts is his fertile tactical imagination. No two battles are the same….Mr. Cornwell’s ‘Saxon Stories’ subvert myths of national origin as few would dare. They are ‘unofficial histories’—and all the more realistic for that.”
— Wall Street Journal on Death of Kings