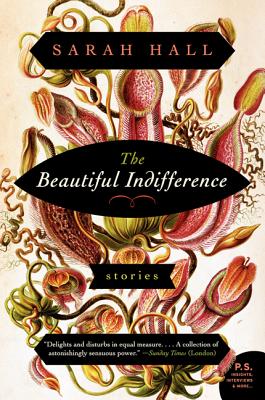 This collection of stories about women by British author Hall is raw and sensual, the prose bewitching and visceral, tinged with violence and sexuality. Whether ill, broken, bored or triumphant, the voices of these women will resonate long after the stories have ended. — Amy Palmer

“Every one of the seven tales here delights and disturbs in equal measure. The Beautiful Indifference illustrates that short fiction is indeed a finely wrought art form, and Hall is an artist of considerable and concise skill. Each story is a gem, but together they from a collection of astonishingly sensuous power.”  — Sunday Times (London)

Sarah Hall has been hailed as "one of the most significant and exciting of Britain's young novelists" (The Guardian). Now, in this remarkable collection of short fiction, she has created a work at once provocative and mesmerizing.

Sarah Hall was born in 1974 in Cumbria, England. She received a master of letters in creative writing from Scotland's St. Andrews University and has published four novels. Haweswater won the Commonwealth Writers' Prize (overall winner, Best First Novel) and a Society of Authors Betty Trask Award. The Electric Michelangelo was shortlisted for the Man Booker Prize, the Commonwealth Writers' Prize (Eurasia Region), and the Prix Femina Étranger, and was longlisted for the Orange Prize for Fiction. Daughters of the North won the 2006/07 John Llewellyn Rhys Prize and the James Tiptree Jr. Award, and was shortlisted for the Arthur C. Clarke Award for science fiction. How to Paint a Dead Man was longlisted for the Man Booker Prize and won the Portico Prize for Fiction. In 2013 Hall was named one of Granta's Best Young British Novelists, a prize awarded every ten years, and she won the BBC National Short Story Award and the E. M. Forster Award from the American Academy of Arts and Letters.

“Well worth the wait . . . These sensuous and hair-raising stories . . . bristle with pure caprice and sheer havoc.
— Elle

“Shows her characteristic ability to cause disquiet ... Hall’s sharply perceptive observations strike like slaps ... These are stimulating, unsettling stories.”
— The Independent on Sunday

“These stories constantly thwart one’s dramatic expectations -- and are all the more dramatic for it ... This prose, particularly when used to convey the bleakness of the Cumbrian landscape, is wonderful ... She does darkness so very well.”
— The Times (London)

“Individually stunning, together these stories comprise a tour-de-force collection that has reignited my love of the form.”
— S.J. Watson

“The Beautiful Indifference illustrates that short fiction is indeed a finely wrought art form, and Hall is an artist of considerable and concise skill. Each story is a gem, but together they from a collection of astonishingly sensuous power.”
— Sunday Times (London)

“Sarah Hall’s writing is breathtaking...I did actually stop breathing once or twice...I loved it.”
— Sadie Jones, author of The Outcast, Small Wars, and The Uninvited Guests

“Hall’s stories are disturbing and delicate, surprising and sad, assured and sensual, with a deliciously dark tint to their edges. What better recommendation for a book of short stories than to be so enchanted that you want to flip them over and start all over again?”
— Peggy Hughes, Scotland on Sunday

“Sarah Hall should be on everyone’ reading list : I think she’s the best British writer around right now...Her deftly exquisite marshalling of language - rendering it fierce and brutal, poetically stark, liltingly sensuous, even unabashedly sexual - matches the sinuous moods of these seven distinctive and accomplished stories.”
— Jonathan Ruppin, Foyles

“Hall’s vaunted writing prowess is apparent throughout... Without judgement, Hall seems to set her characters, and by extension all of us, on a scale with animals, rutting by instinct, violent at heart, governed by the same needs for warmth, sex, shelter and food.”
— Jodie Mullish, Telegraph

“Seven skillfully adrenalised stories, precise and sensual, in which the scent of violence is a constant.”
— Helen Simpson, The Guardian

“Shows her characteristic ability to cause disquiet ... Hall’s sharply perceptive observations strike like slaps ... There is a deeply sensual element to her writing: it is visceral and instinctive ... It’s like sinking into a Rothko painting. Language is used inventively. These are stimulating, unsettling stories that... intrigue and mesmerise.”
— The Independent on Sunday

“Hall evokes her landscapes with bewitchingly vivid prose. Her writing is gutteral and visceral…her characters are raw and sinewy. Every tale…delights and disturbs,..illustrates that short fiction is…a finely wrought art…and Hall is an artist of considerable…skill. [A] collection of astonishingly sensuous power...Hall is a writer of both rare vision and talent.”
— Sunday Times (London)

“These stories...constantly thwart one’s dramatic expectations--and are all the more dramatic for it. This prose...is wonderful.”
— The Times (London)

“THE BEAUTIFUL INDIFFERENCE is a work of art. Each of these stories takes the reader so fully, sensually, and immediately into its world that there is no possibility of putting the book down in the middle of one.”
— Laura Kasischke, author of the NBCC-winning Space, in Chains

“Hall’s women are cheated on, broken up with, sick, bored, lonely; and her writing pulls the reader into subtly rendered but deeply felt worlds . . . American readers who cut their teeth on Joyce Carol Oates . . . will want to give this collection a try.”
— Booklist

“Hall’s prose can be intimate or elliptical but the effect is never less than striking...She expertly evokes unquiet thoughts, broken lives, and haunting encounters with nature, and the work that results never fails to be thrilling.”
— Vol. 1 Brooklyn