A Possibility of Violence: A Novel (Avraham Avraham Series #2) (Hardcover) 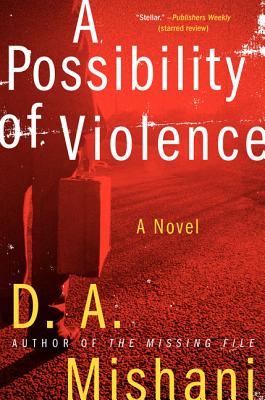 This is book number 2 in the Avraham Avraham Series series.

In Israel, a suitcase bomb near a daycare center initiates a puzzling case for Inspector Avraham. Follow up to The Missing File - well-drawn characters and setting. — Louise Jones

In Israel, a suitcase bomb near a daycare center initiates a puzzling case for Inspector Avraham. Follow up to The Missing File - well-drawn characters and setting. — Louise Jones

Haunted by the past and his own limitations, Israeli Detective Avraham Avraham must stop a criminal ruthless enough to target children in this evocative and gripping tale of mystery and psychological suspense that is the follow-up to The Missing File, the acclaimed first novel in D. A. Mishani’s literary crime series that was shortlisted for the CWA International Dagger Award.

An explosive device is found in a suitcase near a daycare center in a quiet suburb of Tel Aviv. A few hours later, a threat is received: the suitcase was only the beginning.

Inspector Avraham Avraham, back in Israel after a much-needed vacation, is assigned to the investigation. Tormented by the trauma and failure of his past case, Avraham is determined not to make the same mistakes—especially with innocent lives at stake. He may have a break when one of the suspects, a father of two, appears to have gone on the run. Is he the terrorist behind the threat? Is he trying to escape Avraham’s intense investigation? Or perhaps he’s fleeing a far more terrible crime that no one knows has been committed?

No matter how much Avraham wants to atone for the past, redemption may not be possible—not when he’s entangled in a case more deceptive and abominable than any he’s ever faced.

D. A. Mishani is a literary scholar specializing in the history of detective literature. His first novel, The Missing File, was the inaugural book in his literary crime series featuring the police inspector Avraham Avraham.

“Part of the freshness of Mr. Mishani’s novel comes from its striking locale, [and] part from the way the story is told through alternating points of view (Avraham’s and his chief suspects).”
— Wall Street Journal

“… A stellar sequel…Mishani makes good use of his study of the genre to create another psychologically complex case, in the process deepening his lead character.”
— Publishers Weekly (starred review)

“In Mishani’s riveting second novel, the formula works, and works well, but before too long the reader realizes that the formula is left far behind…Mishani’s characters are finely wrought…. Highly recommended…. Mishani’s novel is required reading.”
— Jewish Week

“Lovely writing drew me in from the first chilling section…the atmosphere is wonderful.”
— Suspense Magazine