The Given Day: A Novel (Paperback) 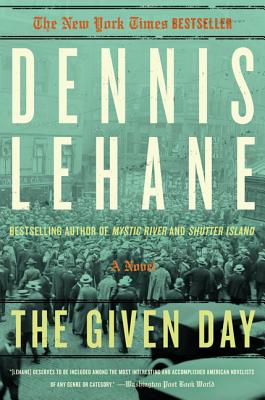 This is a sprawling, epic story set in Boston at the beginning of the 20th century. Lehane's finely etched characters and riveting story easily elevate this novel into a magnificent classic. This is a grand tale of idealism and salvation compellingly told that will captivate any reader. Highest recommendation — Erik Barnum

Set 90 years ago, The Given Day is a rich, beautifully-written historical novel as fresh as though the events happened last week, with finely-drawn characters in a panoramic story impressively researched. — Louise Jones

Writers from Robert Lowell to Edwin O'Connor have long celebrated Boston's rich heritage in poetry and in prose. In many respects, the story of the city reflects the story of America, mirroring a violent, colorful, bigoted, brawling, literate and cultured history that has sprawled well over two centuries.
Boston has been the stage for most of Dennis Lehane's eight books, beginning with A Drink Before the War in 1994. An acclaimed film adaptation of Mystic River was directed by Clint Eastwood in 2003. Lehane's new novel, The Given Day, is set in the years immediately after World War I. It was a time when the city was finding it increasingly difficult to maintain a balance as it teetered on the razor's edge of great social upheavals.
Like E. L. Doctoro's Ragtime, The Given Day is a near perfect union of riveting fact and a soaring imagination. Babe Ruth, Calvin Coolidge, John Reed, J. Edgar (then merely called John) Hoover, and Eugene O'Neill are seamlessly woven into the story. A devastating influenza pandemic that claimed 45,000 lives in Massachusetts and Boston's notorious Molasses Flood (inevitably, if falsely, blamed on anarchists) are also integrated into the panoramic narrative. The interjection of historical figures and events also serve to illustrate the prodigious amount of research that the author must have undertaken in order to lend his book such a distinctive air of credibility. This novel is a sweeping epic of historical fiction that can stand with the great books about Boston or, for that matter, about any city. — Alden Graves

“Bestselling author Dennis Lehane turns his attention to a crime-ridden, post-World War I Boston and the events leading up to the 1919 Boston Police Strike. Richly textured and filled with historical characters (from Babe Ruth and W.E.B. DuBois to a young and ambitious J. Edgar Hoover), The Given Day is arguably Lehane's best book yet.”
— Donna Hawley, Howard's Bookstore, Bloomington, IN

Dennis Lehane, the New York Times bestselling author of Live by Night—now a Warner Bros. movie starring Ben Affleck—offers an unflinching family epic that captures the political unrest of a nation caught between a well-patterned past and an unpredictable future. This beautifully written novel of American history tells the story of two families—one black, one white—swept up in a maelstrom of revolutionaries and anarchists, immigrants and ward bosses, Brahmins and ordinary citizens, all engaged in a battle for survival and power at the end of World War I.

Dennis Lehane is the author of thirteen novels—including the New York Times bestsellers Live by Night; Moonlight Mile; Gone, Baby, Gone; Mystic River; Shutter Island; and The Given Day—as well as Coronado, a collection of short stories and a play. He grew up in Boston, MA and now lives in California with his family.

“Heartfelt and moving. . . . Lehane deserves to be included among the most interesting and accomplished American novelists of any genre or category.”
— Washington Post Book World

“This may be Lehane’s finest work. . . . But The Given Day is more than a history lesson. . . . Lehane captures the essence of being American in a fast-changing society that eerily reflects our own.”
— USA Today

“Steeped in history but wearing its research lightly, The Given Day is a meaty, rich, old-fashioned and satisfying tale. I’d call it Lehane’s masterpiece.”
— Seattle Times

“[A] work of admirable ambition and scope. . . . Lehane is as much like contemporaries George Pelecanos and Richard Price as he is like the bygone Boston-based John P. Marquand, the Pulitzer Prize-winning novelist.”
— Los Angeles Times Book Review

“One of the fall’s biggest books—and not just because it’s 704 pages. It’s Lehane’s most ambitious and literary work.”
— USA Today

“A splendid flowering of the talent previously demonstrated in his crime fiction. . . . A vision of redemption and a triumph of the human spirit. In short, this nail-biter carries serious moral gravity.”
— Publishers Weekly (starred review)

“Lehane’s first historical novel is a clear winner. . . . As good as it gets.”
— Library Journal (starred review)

“A historical epic that is easily the most ambitious work of Dennis Lehane’s career. . . . THE GIVEN DAY aspires to be nothing less than the Great American Novel. . . . If Lehane was ever a singles hitter, now he’s swinging for the fences.”
— Kirkus Reviews

“The problem falls to readers to find something—anything—that doesn’t pale in comparison once they’ve closed the covers on this 720-page masterpiece. Quite simply, THE GIVEN DAY is about as close to the great American novel as we’re likely to read until … well, until Lehane writes another.”
— BookPage

“If you’re swinging for the fences, it only makes sense that your novel begin with a lengthy, and very tasty, story about Babe Ruth. That Dennis Lehane sustains that level of play . . . is what gives THE GIVEN DAY a kind of greatness. . . . Lehane dazzles.”
— Chicago Sun-Times

“Here’s one way to get people excited about the nation’s past: Get Dennis Lehane to write the history books. . . . A meticulously researched tale that in the hands of this master storyteller jumps right off the page and hollers.”
— St. Petersburg Times

“As much a thriller as any of Lehane’s previous work. Even beyond the historical events, THE GIVEN DAY qualifies as a sprawling, sweeping epic. . . . Lehane’s masterful packing and precise prose make the story speed by.”
— Orlando Sentinel

“Packed with dramatic turning points. . . . Lehane has tried to capture the zeitgeist of an era even nuttier and more tumultuous than our own, and succeeded.””
— Entertainment Weekly

“Rollicking, brawling, gritty, political, and always completely absorbing, THE GIVEN DAY is a rich and satisfying epic. Readers, get ready to feast. This is a big book you won’t want to put down.”
— Stewart O'Nan, author of Last Night at the Lobster, A Prayer for the Dying, and Snow Angels