Queen of the Dark Things: A Novel (Hardcover) 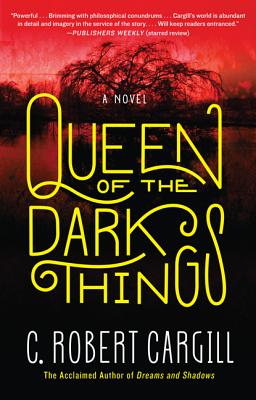 By C. Robert Cargill
Call or email to see if a used copy is available.
Out of Print

Centered in Austin, Texas, this intense sequel to Dreams and Shadows submerges the reader in folklore and mythology while, once again, raising philosophical questions about the nature of good and evil and the integrity of human nature when faced with tough choices. Cargill's screenwriting profession brings this fantastical world to life and keeps the reader hooked from start to finish.... and has this bookseller hoping Colby Stevens' narrative continues in future installments! — Jess Hanlon

Screenwriter and noted film critic C. Robert Cargill continues the story begun in his acclaimed debut Dreams and Shadows in this bold and brilliantly crafted tale involving fairies and humans, magic and monsters—a vivid phantasmagoria that combines the imaginative wonders of Neil Gaiman, the visual inventiveness of Guillermo Del Toro, and the shocking miasma of William S. Burroughs.

Six months have passed since the wizard Colby lost his best friend to an army of fairies from the Limestone Kingdom, a realm of mystery and darkness beyond our own. But in vanquishing these creatures and banning them from Austin, Colby sacrificed the anonymity that protected him. Now, word of his deeds has spread, and powerful enemies from the past—including one Colby considered a friend—have resurfaced to exact their revenge.

As darkness gathers around the city, Colby sifts through his memories desperate to find answers that might save him. With time running out, and few of his old allies and enemies willing to help, he is forced to turn for aid to forces even darker than those he once battled.

Following such masters as Lev Grossman, Erin Morgenstern, Richard Kadrey, and Kim Harrison, C. Robert Cargill takes us deeper into an extraordinary universe of darkness and wonder, despair and hope to reveal the magic and monsters around us . . . and inside us.

“Powerful…. Brimming with philosophical conundrums… Cargill’s world is abundant in detail and imagery in the service of the story. … Will keep readers entranced.”
— Publishers Weekly (starred review)

“As a result, Dreams and Shadows is a potent introduction to a world where the wondrous is rarely wonderful, the best intentions are guaranteed to roam farthest astray, and the reader is destined to keep turning the pages until the (somewhat) bitter end.”
— BookPage

“In this beautifully written debut.... The universe is richly detailed, and issues of destiny and sacrifice give the story depth…for those that enjoy a rollercoaster ride into the depths of strangeness and despair.”
— Publishers Weekly (starred review)

“Exceptional worldbuilding, sure-handed plotting and well-rounded characters, even the nasty ones, abound, and the whole impressive enterprise moves smartly along through a fairy culture with a structure and motivations sharply different from that of humans. A mesmerizing and highly original debut.”
— Kirkus Reviews (starred review)

“Dark, comedic, and unsettling, Dreams and Shadows is everything an urban fantasy sets out to be.”
— Tor.com

“[T]his is a fantasy about mythmaking, learning the uses of power, and living with the consequences of one’s behavior. Recommended for readers of Lev Grossman’s Magicians series and Neil Gaiman’s adult contemporary fantasies.”
— Library Journal on QUEEN OF THE DARK THINGS

“Cargill’s screenwriting chops bring to life a vivid mix of real and imaged folklore in his fantastical second novel. While the mix of urban fantasy, Guillermo Del Toro-like monsters and academic explanations of this magical world shouldn’t work, it absolutely does.”
— No Source on QUEEN OF THE DARK THINGS