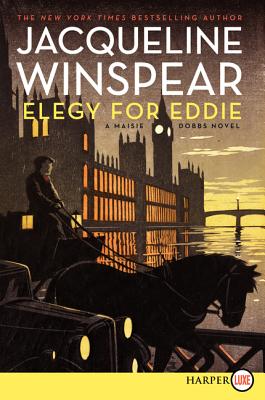 This is book number 9 in the Maisie Dobbs series.

The latest Maisie Dobbs mystery finds our intrepid sleuth investigating the death of a man from her childhood. As Maisie digs deeper, the body count rises and the suspects get higher on the social ladder. A superb addition to this series. — Sarah Donner

“Winspear's latest may be her best, as the indomitable Maisie Dobbs takes on a case dear to her heart. When simple and kind Eddie is killed, his friends refuse to believe his death was accidental and hire Maisie to get to the bottom of the matter. Maisie knew them all, including Eddie, as a child, and she feels compelled to help. As she delves deeper into the mystery of who would want to kill a gentle horse whisperer, she finds herself brushing up against some of the highest political powers and following leads that get more and more personal.”
— Flannery Fitch, Bookshop Santa Cruz, Santa Cruz, CA

In this latest entry in Jacqueline Winspear’s acclaimed, bestselling mystery series—“less whodunits than why-dunits, more P.D. James than Agatha Christie” (USA Today)—Maisie Dobbs takes on her most personal case yet, a twisting investigation into the brutal killing of a street peddler that will take her from the working-class neighborhoods of her childhood into London’s highest circles of power. Perfect for fans of A Lesson in Secrets, The Mapping of Love and Death, or other Maisie Dobbs mysteries—and an ideal place for new readers to enter the series—Elegy for Eddie is an incomparable work of intrigue and ingenuity, full of intimate descriptions and beautifully painted scenes from between the World Wars, from one of the most highly acclaimed masters of mystery, Jacqueline Winspear.

Jacqueline Winspear is the author of the New York Times bestsellers The Consequences of Fear, The American Agent, and To Die but Once, as well as thirteen other bestselling Maisie Dobbs novels and The Care and Management of Lies, a Dayton Literary Peace Prize finalist. Jacqueline has also published two nonfiction books, What Would Maisie Do? and a memoir, This Time Next Year We’ll Be Laughing. Originally from the United Kingdom, she divides her time between California and the Pacific Northwest.

“Long before the Downton Abbey craze, Jacqueline Winspear was writing remarkable mysteries about life in England circa WWI.” — New York Journal of Books

“A series that seems to get better with every entry.” — Tom Nolan, Wall Street Journal

“When people ask me to recommend an author, one name consistently comes to mind: Jacqueline Winspear...Winspear chronicles the uncharted, sometimes rocky path chosen by her protagonist and delivers results that are educational, unique, and wonderful.” — Deirdre Donahue, USA Today

“For as long as each novel lasts, we live in Maisie’s suspenseful, intelligent world.” — Evelyn Theiss, Cleveland Plain Dealer

“[Catches] the sorrow of a lost generation in the character of one exceptional woman.” — Chicago Tribune

“Terrific....Maisie is one of the great fictional heroines, equal parts haunted and haunting.” — Parade

“For readers yearning for the calm and insightful intelligence of a main character like P.D. James’s Cordelia Gray, Maisie Dobbs is spot on.” — Hallie Ephron, Boston Globe

“Excellent….The involved plot is as good as any in the series, and the resolution is intelligently complex.” — Publishers Weekly

“Like any typical PI, Maisie is preternaturally acute and given to noticing tiny details, but it’s her compassion that allows her to illuminate some of the most pressing and staggeringly painful issues of her day, delivering unexpected answers and sense of peace to her clients-and her readers.” — Nathalie Gorman, O, the Oprah Magazine

“Reading Jacqueline Winspear’s Elegy for Eddie, the solid-gold ninth installment in a wonderful mystery series that shows no signs of flagging, you can’t help thinking that her nurse-turned psychologist-turned sleuth would make an ideal PBS heroine.” — Robert Bianco, USA Today

“A work of great humanity and a stellar entry in a superb series.” — Jay Strafford, Richmond Times-Dispatch