How to Survive the Titanic: The Sinking of J. Bruce Ismay (Paperback) 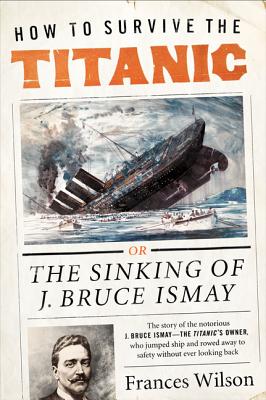 J. Bruce Ismay lived for 25 years after the night he stepped into a lifeboat from the sinking Titanic. Although a number of men lived through the disaster, many people on both sides of the Atlantic felt that Ismay, as Chairman of the Board of the White Star Line, should not have been one of them. Fascinating study of an enigmatic man, whose cardinal sin in the eyes of the world was saving himself. — Alden Graves

Award-winning historian Frances Wilson delivers a gripping new account of the sinking of the RMS Titanic, looking at the collision and its aftermath through the prism of the demolished life and lost honor of the ship’s owner, J. Bruce Ismay. In a unique work of history evocative of Joseph Conrad’s classic novel Lord Jim, Wilson raises provocative moral questions about cowardice and heroism, memory and identity, survival and guilt—questions that revolve around Ismay’s loss of honor and identity as his monolithic venture—a ship called “The Last Word in Luxury” and “The Unsinkable”—was swallowed by the sea and subsumed in infamy forever.

Frances Wilson was educated at Oxford University and lectured on nineteenth- and twentieth-century English literature for fifteen years before becoming a full-time writer. Her books include Literary Seductions: Compulsive Writers and Diverted Readers and The Ballad of Dorothy Wordsworth: A Life, which won the British Academy Rose Mary Crawshay Prize. She reviews widely in the Britishpress and is a fellow of the Royal Society of Literature. She divides her time between London and Normandy.

“Wilson gives an absorbing account of the disaster and its cultural associations.. . her approach yields a rich meditation on the mere moment’s hesitation that separates cowardice from courage.”
— Publishers Weekly

“It is a pleasure to read a book…that offers something new on this topic. Titanic completists will certainly want this, and also…readers of biography and Edwardian-era history.”
— Library Journal

“The author demonstrates an impressive knowledge of that night to remember. ”
— Kirkus Reviews

“Wilson herself casts a Conradian spell…finds submerged truths, unravels riddles, listens to echoes. This book is a deep reading of the catastrophe through one hapless, inert man.”
— Hermione Eyre, Evening Standard

“A haunting story…A meticulously researched and eloquently written account of one of the twentieth century’s most iconic disasters [that] explores a man ‘mired in the moment of his jump.’”
— Lucy Scholes, Daily Beast "Must Reads"

“A gripping retrospective on the Titanic disaster seen through the eyes of the wealthy ship’s owner…and an inspired interweaving of the moral themes of guilt and responsibility”
— Richard Holmes, Wall Street Journal

“A gripping account…Wilson brings a bright new perspective to the event raising provocative moral questions about cowardice and heroism, memory and identity, survival and guilt.”
— Forbes

“Persuasive…examines the disaster afresh through the prism of Ismay’s life…Ultimately, Wilson’s portrait-empathetic rather than sympathetic-depicts Ismay as an Everyman troublingly suited to our own uncertain times.”
— BusinessWeek