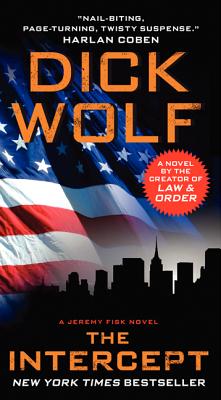 This is book number 1 in the Jeremy Fisk Novels series.

“This debut by Wolf, the award-winning creator of the television series Law & Order, introduces Jeremy Fisk, a detective in the NYPD's antiterrorism intelligence-gathering agency. After an attempted airline high-jacking is foiled by a handful of passengers just days before the President is scheduled to attend a July 4th celebration in New York City, Fisk and other law enforcement specialists surmise that the high-jacking was just a diversion. But then who -- or what -- is the real target? And how can the plan be foiled without knowing the identity of the real terrorist? Time is of the essence in this well written page-turner.”
— Ellen Klein, Hooray for Books!, Alexandria, VA

But New York Police detective Jeremy Fisk—from the department’s Intelligence Division, a well-funded anti-terror unit modeled upon the CIA—suspects that the event is a warning sign that another, potentially more extraordinary scheme has been set in motion. So when a passenger from the same plane disappears into the crowds of Manhattan, it’s up to Fisk and his partner Krina Gersten to find him before the celebrations begin... And time is running out.

“The Intercept is the hottest thriller of the year. Superbly written and amazingly intense, Dick Wolf has created an action-packed masterpiece. Picture Robert Ludlum writing for “24” and you’re only halfway there. Do not miss this incredible novel. Intercept yours ASAP!”
— Brad Thor, #1 New York Times bestselling author of Black List

“An adrenaline-fueled, ripped-from-the-headlines suspense novel, as befitting a renowned TV crime drama writer and producer. The Intercept goes where few thrillers have gone before . . . It does for the NYPD’s Intelligence Division what Thomas Harris did for the FBI’s Behavioral Science Unit.”
— Lisa Gardner, New York Times bestselling author of Catch Me

“A thriller that grabs your attention on page one and holds it until the breathtaking ending. Jeremy Fisk of the NYPD’s Intelligence Division will enter literature’s Great Detectives Hall of Fame. I hope to see more of him. . . It’s a head above most War on Terrorism novels.”
— Nelson DeMille, New York Times bestselling author of The Lion

“A smart, suspenseful, highly professional piece of work that should rank with the best of this year’s thrillers.”
— Washington Post