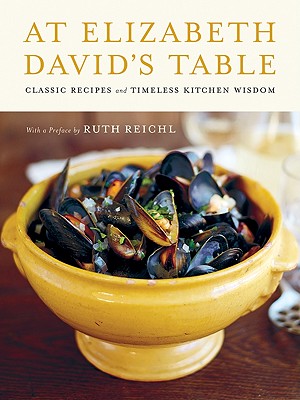 David introduced French and Mediterranean cooking to Britain after WWII, and here are many of her simple, extraordinary recipes, beautifully illustrated as her original books never were. A real treat. — Louise Jones

At Elizabeth David’s Table offers classic recipes and timeless kitchen wisdom from the woman who revolutionized British cuisine. Elizabeth David, the acclaimed counterpart to Julia Child, is considered the greatest food writer of the twentieth century—and this lavishly illustrated collection of inspiring everyday recipes celebrates chef David’s culinary genius. Published to celebrate the 60th anniversary of Mediterranean Food, her classic first book, At Elizabeth David’s Table is a wonderful gift from the revolutionary chef who introduced a weary, post-war nation to the sun-drenched tastes and delights of the Mediterranean.

Elizabeth David (1913-1992) travelled widely during the Second World War throughout Europe, the Middle East and India. She returned to England in 1946 to write the classic Mediterranean Food, followed by five other books that all became bestsellers. Also a prolific journalist, she was made a Fellow of the Royal Society of Literature in 1982, and a Commander of the British Empire in 1986.

“The food rendered in blooming center-focus color, the images as soft at the edges as a dream… This title serves as a good introduction, to be followed by trips to the used-book store for the originals, best consumed with an omelet and a glass of wine.”
— Sam Sifton, New York Times

“[Elizabeth David] was James Beard, Julia Child, and MFK Fisher rolled into one… She has so much more to tell us than merely how to cook... reading between the lines you come to understand that what Elizabeth David is really saying is to savor every minute of your life.”
— Ruth Reichl

“I am still surprised every time I read Elizabeth David; she defines what it is to be a true food writer, and her words are timeless. This beautiful illustrated anthology reveals her bright spirit... She defends the authentic and the seasonal, and champions simplicity and beauty in the kitchen. ”
— Alice Waters

“Her writing is as timeless as the cuisines she describes. Re-reading her recipes, I am struck again, and again, that each is a seductive little invitation to cook. And if you love to cook, discovering her work is surely one of the greatest pleasures of all.”
— Judy Rodgers