Inside Out: A Memoir (Hardcover) 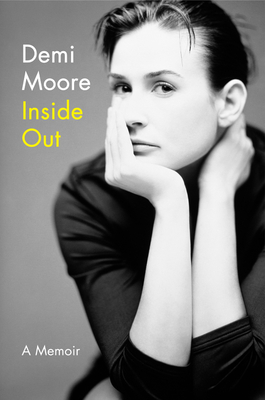 By Demi Moore
$27.99
Click Title for IN STOCK Location

A Best Book of the Year: The New Yorker, The Guardian, The Sunday Times, The Daily Mail, Good Morning America, She Reads

Famed American actress Demi Moore at last tells her own story in a surprisingly intimate and emotionally charged memoir.

For decades, Demi Moore has been synonymous with celebrity. From iconic film roles to high-profile relationships, Moore has never been far from the spotlight—or the headlines.

Even as Demi was becoming the highest paid actress in Hollywood, however, she was always outrunning her past, just one step ahead of the doubts and insecurities that defined her childhood. Throughout her rise to fame and during some of the most pivotal moments of her life, Demi battled addiction, body image issues, and childhood trauma that would follow her for years—all while juggling a skyrocketing career and at times negative public perception.  As her success grew, Demi found herself questioning if she belonged in Hollywood, if she was a good mother, a good actress—and, always, if she was simply good enough.

As much as her story is about adversity, it is also about tremendous resilience. In this deeply candid and reflective memoir, Demi pulls back the curtain and opens up about her career and personal life—laying bare her tumultuous relationship with her mother, her marriages, her struggles balancing stardom with raising a family, and her journey toward open heartedness. Inside Out is a story of survival, success, and surrender—a wrenchingly honest portrayal of one woman’s at once ordinary and iconic life.

Demi Moore is an actress, producer, director and activist. She is known for her roles in St. Elmo’s Fire, About Last Night, Ghost, A Few Good Men, Indecent Proposal, G.I. Jane, Charlie’s Angels: Full Throttle, Margin Call, among many others. Moore is also a co-founder of Thorn, a non-profit that builds technology to defend children from sexual abuse, exploitation, and trafficking. She lives in Los Angeles and Hailey, Idaho.

“To Moore’s great credit, she tells her story frankly but also with dignity, tact and generosity toward the important people in her life…. This discretion is emblematic of a memoir that is sometimes shocking but never salacious.… The actress in person proves to be very much like the woman on the page: thoughtful, questioning, at times openly insecure, but also forthright, often bracingly so. … Is it OK that I’m here? That question seems to linger, along with How did I get here? If the book is intended, consciously or not, as an answer to both, it’s a good and strong one.”
— Bruce Handy, Wall Street Journal

“A candid personal narrative, in which Moore fills in not only the details surrounding the most visible parts of her history … but the portions of her life that she once fought to protect…. It is surprising to see such self-revelation from any prominent Hollywood actress—let alone one with Moore’s particular accomplishments and setbacks.”
— Dave Itzkoff, New York Times

“What you get from this book that you can’t get anywhere else isn’t the rags-to-riches story but rather the honest and arresting way she details her slow drift into a different kind of emotional poverty, the sort that only decades of tabloid harassment and unchecked trauma can alchemize. She narrates, with the precision of a butcher’s knife, her divorces, addiction, and eventual isolation, but from this she pulls forth her most potent character yet: a fully formed, gives-no-fucks woman of wisdom.”
— Lena Dunham, Harper’s Bazaar

“I’ll say this for Moore: She’s got issues, and she’s made mistakes — but in this book, she owns them. Fiercely….You want juicy details? That’s what you expect in a celebrity memoir, and you certainly get them here….But you also get something you almost never find in a celebrity memoir: candor.”
— Tina Jordan, New York Times Book Review

“The actress gets candid in a way few modern A-listers have…. Poignant.”
— People

“I was surprised that what I liked about it wasn’t, in fact, its gossipy revelations but the window it provided into the sensitive, reflective interiority of a woman who, for all her worldly success, has always been searching for the self-acceptance that eludes so many of us, whether we’re famous or not. By the end of the memoir, in a final section titled “Surrender,” Moore writes, of this quest, “The truth is, the only way out is in.” It is a tribute to the psychological acuity of this book that I felt the earned honesty of these words deeply.”
— NewYorker.com

“Entirely unexpected…. One of the most relatable depictions of motherhood I’ve read.”
— New York Magazine’s “The Cut”

"Inside Out achieves what every good celebrity memoir should: it makes you look at the subject differently, and Moore emerges as simultaneously more relatable and more remarkable."
— The Guardian

“Astonishingly candid…. A fabulously frank and well-written book and, after such rollercoaster of a ride one finds oneself in awe of Moore for determinedly clinging on.”
— The Sunday Times