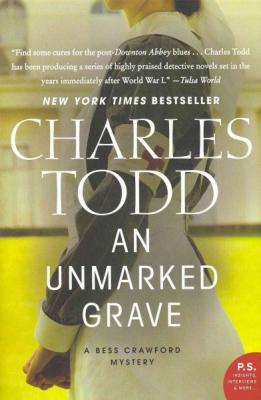 This is book number 4 in the Bess Crawford Mysteries series.

When WW1 nurse Bess Crawford discovers a body awaiting burial, she knows the officer was not a victim of the Spanish flu or battle wounds. Her investigation takes her from the battlefields of France to the British countryside, putting not only herself but those she holds dear into the path of a murderer. — Sarah Donner

“A wonderful new mystery series that will let us see the horrors of World War I through the eyes of Bess Crawford, battlefield nurse.”
—Margaret Maron

“Readers who can’t get enough of Jacqueline Winspear’s novels, or Hester Latterly, who saw action in the Crimean War in a series of novels by Anne Perry, are bound to be caught up in the adventures of Bess Crawford.”
—New York Times Book Review

The critically acclaimed, New York Times bestselling author of the Ian Rutledge mystery series, Charles Todd once again spotlights World War I nurse Bess Crawford in An Unmarked Grave. Gripping, powerful, and evocative, this superb mystery masterwork unfolds during the deadly Spanish Influenza pandemic of 1918, as Bess discovers the body of a murdered British officer among the many dead and sets out to unmask a craven killer.