Ghosts by Gaslight: Stories of Steampunk and Supernatural Suspense (Paperback) 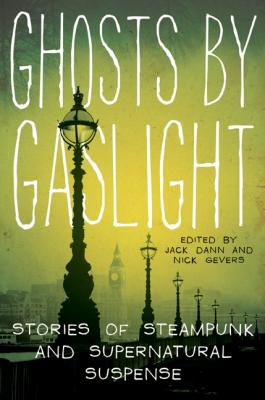 Fans of both Horror and Steampunk will enjoy this chilling collection of Victorian and Edwardian era ghost stories. — Sarah Donner

Edited by Jack Dann (World Fantasy Award-winning co-editor of Dreaming Down Under) and Nick Gevers (acclaimed editor and book reviewer), Ghosts by Gaslight is a showcase collection of all-new stories of steampunk and supernatural suspense by modern masters of horror, fantasy, sf, and the paranormal. An absolutely mind-boggling gathering of some of today’s very best dark storytellers—including Peter Beagle, James Morrow, Sean Williams, Gene Wolfe, Garth Nix, Marly Youmans, Jeffery Ford, and Robert Silverberg—Ghosts by Gaslight offers chilling gothic and spectral tales in a delightfully twisted Victorian and Edwardian vein. Think Henry James’s Turn of the Screw and Robert Louis Stevenson’s The Strange Case of Dr. Jekyll and Mr. Hyde with a decidedly steampunk edge, and you’re ready to confront Ghosts by Gaslight.

Jack Dann is a multiple award winning author who has written or edited over 60 books, including the groundbreaking novels Junction, Starhiker, The Man Who Melted, The Memory Cathedral -- which is an international bestseller, the Civil War novel The Silent, and Bad Medicine, which has been compared to the works of Jack Kerouac and Hunter S. Thompson and called "the best road novel since the Easy Rider days."

Dann's work has been compared to Jorge Luis Borges, Roald Dahl, Lewis Carroll, Castaneda, J. G. Ballard, Mark Twain, and Philip K. Dick. Philip K. Dick, author of the stories from which the films Blade Runner and Total Recall were made, wrote that "Junction is where Ursula Le Guin's Lathe of Heaven and Tony Boucher's 'The Quest for Saint Aquin' meet...and yet it's an entirely new novel.... I may very well be basing some of my future work on Junction." Best-selling author Marion Zimmer Bradley called Starhiker "a superb book... it will not give up all its delights, all its perfections, on one reading."

Library Journal has called Dann "...a true poet who can create pictures with a few perfect words." Roger Zelazny thought he was a reality magician and Best Sellers has said that "Jack Dann is a mind-warlock whose magicks will confound, disorient, shock, and delight." The Washington Post Book World compared his novel The Man Who Melted with Ingmar Bergman's film The Seventh Seal.

He is a recipient of the Nebula Award, the Australian Aurealis Award (twice), the Ditmar Award (three times), the World Fantasy Award, and the Premios Gilgamés de Narrativa Fantastica award. Dann has also been honoured by the Mark Twain Society (Esteemed Knight).

High Steel, a novel co-authored with Jack C. Haldeman II, was published in 1993. Critic John Clute called it "a predator...a cat with blazing eyes gorging on the good meat of genre. It is most highly recommended." A sequel entitled Ghost Dance is in progress.

Dann's major historical novel about Leonardo da Vinci -- entitled The Memory Cathedral -- was first published in December 1995 to rave reviews. It has been published in 10 languages to date. It won the Australian Aurealis Award in 1997, was #1 on The Age bestseller list, and a story based on the novel was awarded the Nebula Award. The Memory Cathedral was also shortlisted for the Audio Book of the Year, which was part of the 1998 Braille & Talking Book Library Awards.

Morgan Llwelyn called The Memory Cathedral "a book to cherish, a validation of the novelist's art and fully worthy of its extraordinary subject." The San Francisco Chronicle called it "a grand accomplishment," Kirkus Reviews thought it was "An impressive accomplishment," and True Review said, "Read this important novel, be challenged by it; you literally haven't seen anything like it."

Dann's next novel The Silent was chosen by Library Journal as one of their 'Hot Picks.' Library Journal wrote: "This is narrative storytelling at its best -- so highly charged emotionally as to constitute a kind of poetry from hell. Most emphatically recommended." Auhor Peter Straub said, "This tale of America's greatest trauma is full of mystery, wonder, and the kind of narrative inventiveness that makes other novelists want to hide under the bed." And The Australian called it "an extraordinary achievement."

His contemporary road novel Bad Medicine (titled Counting Coup in the U.S.) has been called "a vivid and compelling vision-quest through the dark back roads and blue highways of the American soul."

Dann is also the co-editor (with Janeen Webb) of the groundbreaking Australian anthology Dreaming Down-Under, which Peter Goldsworthy has called "the biggest, boldest, most controversial collection of original fiction ever published in Australia." It has won Australia's Ditmar Award and is the first Australian book ever to win the prestigious World Fantasy Award.

Dann is also the author of the retrospective short story collection Jubilee: the Essential Jack Dann. The West Australian said it was "Sometimes frightening, sometimes funny, erudite, inventive, beautifully written and always intriguing. Jubilee is a celebration of the talent of a remarkable storyteller."

As part of its Bibliographies of Modern Authors Series, The Borgo Press has published an annotated bibliography and guide entitled The Work of Jack Dann. An updated second edition is in progress. Dann is also listed in Contemporary Authors and the Contemporary Authors Autobiography Series; The International Authors and Writers Who's Who; Personalities of America; Men of Achievement; Who's Who in Writers, Editors, and Poets, United States and Canada; Dictionary of International Biography; the Directory of Distinguished Americans; Outstanding Writers of the 20th Century; and Who's Who in the World.

Dann commutes between Melbourne and a farm overlooking the sea. He also 'commutes' back and forth to Los Angeles and New York.

“[A] collection of the eerie and fantastic.” — Washington Post

“Devotees of M. R. James, H. P. Lovecraft and Algernon Blackwood will relish this superior anthology of original stories…. It seems almost unfair to single out individual works when all 18 are superb and will be cherished by steampunk and horror fans alike.” — Publishers Weekly (starred review)

Ghosts By Gaslight is a triumph of a themed anthology. Among the hundred or so books I have read this year, this one is my favorite. Acquire it at all costs. Highly recommended. — Cemetery Dance Magazine