I'm Your Man: The Life of Leonard Cohen (Hardcover) 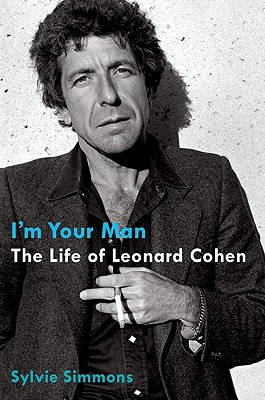 By Sylvie Simmons
Call or email to see if a used copy is available.
Hard to Find - May no longer be available

Poet, monk, clown, lover, song and dance man ... Cohen is also an enigma. Drawing on her own encounters and Cohen's circle, one of the best music writers today elucidates his lifelong spiritual quest and staggering body of song. — Charles Bottomley

Singer/songwriter Leonard Cohen is one of the most important and influential musical artists of the past fifty years—and one of the most elusive. In I’m Your Man, journalist Sylvie Simmons, one of the foremost chroniclers of the world of rock ’n’ roll and popular music, explores the extraordinary life and creative genius of Leonard Cohen.

I’m Your Man is an intimate and insightful appreciation of the man responsible for “Suzanne,” “Bird on a Wire,” “Hallelujah,” and so many other unforgettable, oft-covered ballads and songs.  Based on Simmons’s unparalleled access to Cohen—and written with her hallmark blend of intelligence, integrity, and style—I’m Your Man is the definitive biography of a major musical artist widely considered in a league with the great Bob Dylan.

Readers of Life by Rolling Stone Keith Richards and Patti Smith’s phenomenal Just Kids will be riveted by this fascinating portrait of a singular musical icon.

Sylvie Simmons is an award-winning writer and one of the foremost music journalists working today. Born in London, she moved to Los Angeles in the late seventies and started writing about rock music for magazines such as Sounds, Creem, Kerrang! and Q. She is the author of acclaimed fiction and nonfiction books, including the biography Serge Gainsbourg: A Fistful of Gitanes and the short-story collection Too Weird for Ziggy. She has lived at various times in England, the United States, and France, and she currently lives in San Francisco, where she writes for MOJO magazine and plays the ukulele.

“A thoughtful celebration of the artist’s life...Simmons has deftly narrated Cohen’s evolution... In the end, this biography has the oddest effect: as soon as you finish reading it you feel an overwhelming impulse to go back and begin again, revisiting the story with what you’ve learned along the way.”
— A.M. Homes, New York Times Book Review

“This is the bio Cohen has long deserved, and it makes every prior Cohen book practically unnecessary.”
— Rolling Stone, 4 1/2 Stars

“The book is a seductive tribute to a master seducer.”
— The Onion A.V. Club

“A deep, enlightening book. . . Simmons, a music journalist and short-story writer, knows how to research and write and keep a critical distance from Cohen, who opens up some but uses his usual weapons, politeness and self-deprecation, to maintain an air of mystery.”
— The Oregonian (Portland)

“Leonard fought darkness through his work and... the light ultimately prevailed when he triumphantly toured the world for three years beginning in 2008... ‘You could hear the hairs stand up on people’s arms,’ writes Simmons of the hushed reverence of his audience. This book demands a similar reaction.”
— MOJO Magazine, 5 Stars

“This is a revelatory biography that investigates not just an artist’s life, but the life of his art.”
— Shelf Awareness

“In I’m Your Man, we see not only the life of one man who was transformed by words, but how we ourselves may be transformed by them.”
— New York Jewish Week

“Simmons’ rich, compelling and provocative book... is a star-studded but also frank account of how the music industry really works and, at the same time, a discerning portrait of one especially important musician.”
— Jewish Journal Los Angeles

“Simmons is a wonderful writer... the book informs like carefully researched non-fiction, but engages like enchanting fiction... Like listening to one of Cohen’s songs, this complex, beautiful biography requires you to think about it. This book will stay with you. It will change the way you hear Leonard Cohen.”
— Paste Magazine

“[A] vibrant and enthusiastic chronicle... Carefully weaving the threads of all of his songs and albums through the patterns of his life, Simmons craftily explores the themes that regularly mark Cohen’s work: desire, regret, suffering, love, hope, and hamming it up.”
— Publishers Weekly (starred review)

“In this elegantly crafted biography, Simmons captures the artist who, in spite of all his highs and lows, is still sharp at the edges, a wise old monk, a trouper offering up himself and his songs.”
— BookPage

“The success of Simmons’ book is the way it deftly integrates each facet in a unified portrait.”
— San Jose Mercury News

“Cohen is a complex man and Sylvie Simmons has captured every essence of it in her remarkable book. This is a deeply insightful portrait that is guaranteed to haunt the reader much like his “Suzanne” and “Bird on the Wire.”
— The Tuscon Citizen

“Compelling biography. . . A must for anyone interested in one of the most influential songwriters of our time.”
— Booklist (starred review)