Shot All to Hell: Jesse James, the Northfield Raid, and the Wild West's Greatest Escape (Hardcover) 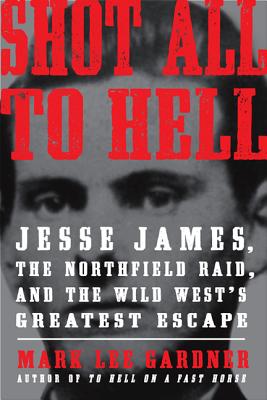 The botched robbery of a Northfield, Minnesota bank sets off one of the largest manhunts in American history, with the quarry being the James/Younger gang. A thrilling chronicle of the ordeal endured by the robbers to escape the noose that was slowly tightening around their notorious careers. — Alden Graves

“Mark Gardner's Shot All to Hell is the riveting tale of the Old West's most brazen crime. Over 130 years have passed since the death of Jesse James, yet we remain fascinated by this enigmatic outlaw and his gang. By 1876, the James-Younger gang was both feared and famous. Their decision to rob the First National Bank in Northfield, Minnesota would prove to be a disaster. Citizens rose up to defend their town. Gardner's account of the crime and aftermath is thorough and enthralling. His recreation of the robbery, and the shoot-out that followed the two-week manhunt, is edge-of-your-seat exciting. The book's epilogue shares what fate had in store for both the heroes and villains of the Northfield raid. Gardner's passion for his subject and his vivid writing combine to make this the make Shot All to Hell the definitive book on the infamous crime. I am thrilled to have been a early reader of this great book.”
— Christopher Rose, Andover Bookstore, Andover, MA

Shot All to Hell by Mark Lee Gardner recounts the thrilling life of Jesse James, Frank James, the Younger brothers, and the most famous bank robbery of all time.

Follow the Wild West’s most celebrated gang of outlaws as they step inside Northfield’s First National Bank and back out on the streets to square off with heroic citizens who risked their lives to defend justice in Minnesota.

With compelling details that chronicle the two-week chase that followed—the near misses, the fateful mistakes, and the bloody final shootout on the Watonwan River, Shot All to Hell is a galloping true tale of frontier justice from the author of To Hell on a Fast Horse: The Untold Story of Billy the Kid and Pat Garrett, Mark Lee Gardner.

Mark Lee Gardner is the author of Rough Riders, To Hell on a Fast Horse and Shot All to Hell, which received multiple awards, including a Spur Award from Western Writers of America. An authority on the American West, Gardner has appeared on PBS’s American Experience, as well as on the History Channel, AMC, the Travel Channel, and on NPR. He has written for National Geographic History, American Heritage, the Los Angeles Times, True West, and American Cowboy. He holds an MA in American Studies from the University of Wyoming and lives with his family at the foot of Pikes Peak.

“Superb. ... Mr. Gardner earns an A+ for his research and an A++ for his writing. — New York Journal of Books

“An elegant narrative that’s as entertaining as it is historically accurate… A must-read.” — Publishers Weekly

“Action packed…A gripping read and probably tells all there is to tell about a legendary group of psychopaths.” — Kirkus

“[This] bullet-by-bullet account... sheds considerable light on a neglected aspect of the gang’s life of crime... well done.” — Booklist

“Rewarding. ... Gardner’s re-creation of the Northfield Raid... orchestrates the often-unwieldy particulars of the event with considerable virtuosity. ... It would be hard to imagine a more thorough account.” — Washington Post