Fever of the Bone: A Novel (Tony Hill and Carol Jordan Series #6) (Paperback) 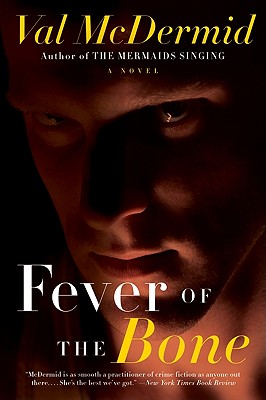 This is book number 6 in the Tony Hill and Carol Jordan Series series.

This compelling crime novel is another bravura performance from McDermid. Profiler Tony Hill and Detective Chief Inspector Carol Jordan are forced to work on separate cases until Hill sees similarities. The stunning conclusion solves the crimes and forecasts complex changes in the Jordan/Hill relationship. — Louise Jones

“McDermid is as smooth a practitioner of crime fiction as anyone out there….She’s the best we’ve got.”
—New York Times Book Review

Scottish writer Val McDermid is one of the most respected authors at the scene of the crime, and Fever of the Bone offers a bravura display of her exceptional storytelling talents. Criminal profiler Tony Hill and his ally Detective Chief Inspector Carol Jordan are back in this terrifying psychological thriller, tracking down a brutal killer who’s targeting a group of young people through a social networking site. A winner of the Gold Dagger Award, a Los Angeles Times Book Prize, and an Edgar® Award nominee—a New York Times Notable author whose writing Entertainment Weekly calls, “smooth, confident, deeply satisfying,”—Val McDermid is a crime fiction force of nature. And Fever of the Bone is among her best.

VAL McDERMID is the internationally bestselling author of more than twenty crime novels. She has won the CWA Gold Dagger Award for Best Crime Novel of the Year and the Los Angeles Times Book Prize; her novels have been selected as New York Times Notable Books and have been Edgar Award finalists. She was the 2010 recipient of the CWA Cartier Diamond Dagger for Outstanding Achievement in the Field of Crime Writing. More than 10 million copies of her books have been sold around the world. She lives in the north of England. Visit her website at www.valmcdermid.com.