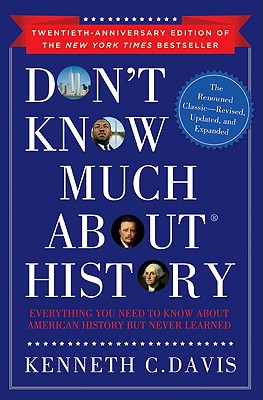 “Reading [Kenneth C. Davis] is like returning to the classroom of the best teacher you ever had.” —People

Revised, updated, and expanded, the Twentieth Anniversary Edition of Kenneth C. Davis’s classic anti-textbook Don’t Know Much About History revitalizes the landmark book’s ability to revolutionize the way we look at our past. Like Howard Zinn’s A People’s History of the United States, Davis’s Don’t Know Much About History captivates readers with a wry and lucid, comprehensive and comprehensible narrative. With a new section covering the twenty-first century’s most significant events, from the Great Recession to Hurricane Katrina to the election of Barack Obama and more, the Twentieth Anniversary Edition of Don’t Know Much About History reinvigorates the book’s crucial promise of delivering fascinating, insight-driven learning to a new generation of readers.

Kenneth C. Davis is the New York Times bestselling author of A Nation Rising; America's Hidden History; and Don't Know Much About® History, which spent thirty-five consecutive weeks on the New York Times bestseller list, sold more than 1.7 million copies, and gave rise to his phenomenal Don't Know Much About® series for adults and children. A resident of New York City and Dorset, Vermont, Davis frequently appears on national television and radio and has been a commentator on NPR's All Things Considered. He blogs regularly at www.dontknowmuch.com.