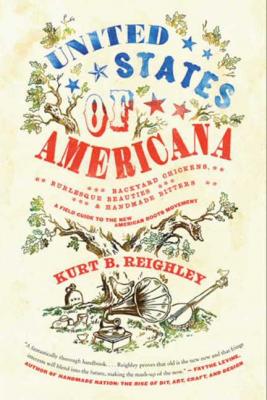 A field guide to the new American Roots movement, United States of Americana is a vivid, fascinating, and comprehensive survey of how and why young urban Americans are finding inspiration in the cultural traditions of an earlier time in many areas of contemporary life. Compiled by Seattle-based writer, DJ, and entertainer Kurt B. Reighley, United States of Americana explores this vibrant cultural phenomenon—from the music, to the clothing, to the food and drink, to the rebirth of home canning, straight razors, burlesque, and circuses.

Kurt B. Reighley is a Seattle-based writer, DJ, and entertainer. He was a contributing editor at No Depression and has written for Rolling Stone, Details, The Stranger, and The Advocate. Reighley's work also appears on MSN.com, and he can be heard weekly on KEXP 90.3 FM Seattle.

“I love it! Kurt conveys the irresistable charm of the roots movement, showing that a taste for the details of the past can blend playfully with the amenities of the present. Independent circus and neo-burlesque are just a couple of the cultural movements he brings to life.” — Jo Weldon, author of The Burlesque Handbook

“Reighley’s book is your magical wardrobe into the Narnia of Americana. If it isn’t in here, it isn’t part of the heritage. Always fun, fully informed, astutely researched, and extremely generous in scope, United States of Americana is the lexicon of a laudable way of life.” — Wesley Stace, also known as John Wesley Harding

“Encompassing, engaging, and definitive. . . . Reighley shows us the Americana movement from the inside. . . . Perfect bedside reading for anyone seeking to inch their way toward a more enriched and rewarding lifestyle.” — John Roderick, from The Long Winters

“United States of Americana reminds us of many things we need reminding of. . . . This book will hopefully show the reader that while our hands have perhaps softened they are not just for eating, typing, and tying our shoes.” — Chris Bray, co-founder of Billykirk

“A fantastically thorough handbook. . . . Reighley proves that old is the new new and that fringe interests will blend into the future, making the mash-up of the now.” — Faythe Levine, author of Handmade Nation: The Rise of D.I.Y. Art, Craft & Design

“Capturing that “old weird America” with a decidedly 21st century spin, Reighley guides his audience through the intricacies of cocktails and canning parties, where to pick up a good pair of boots, and why Modern Sounds in Country & Western Music is essential listening.” — Justin Gage, of Aquarium Drunkard

“Reighley’s tome is a font of knowledge. . . . [We have an] affection for this call to reclaim our scrappy American individualism.” — Modern Tonic

“[Takes] us back to the place where we knew how to make things that would last, how to take care of them — and even knew the people who made them. . . . His entertaining, informed chapter on music is a micro field guide in itself.” — Atlanta Journal-Constitution

“It’s hard to imagine a simpler, slower time—but plenty of us are trying to make a return. . . . [United States of Americana] can help you recapture a bit of America as it used to be, before the days of Internets and iPhones. — Uncrate.com

“[An] exploration of an idiosyncratic but undeniable right-now culture movement. . . . Reighley’s like a wool-shirted, moonshine-sipping uncle tying up trends and connecting the return-to-the-good-olde-days dots from his post on some picturesque porch. It’s a really fun read.” — Seattle Metropolitan Magazine

“For any American who’s ever thought about playing a vinyl record, making some jam, or ordering a pair of custom-made boots, this semi-encyclopedia to the new age of ‘essential pragmatism’ and craftsmanship is a delight. . . . Comprehensive, well-written, and enjoyable.” — Publishers Weekly

“Reighley shows how working a little to find the tried and true can feel more deeply satisfying than buying into today’s fast-paced consumer culture.” — The Oregonian (Portland)

“A comprehensive guide to young America’s return to the ways of generations past, with immersive chapters on such activities as raising chickens, facial hair grooming, and burlesque.” — Portland Mercury

“The resurgence in old-school Americana is part of a national trend, one thoroughly and captivatingly mapped [in United States of Americana]. . . . Reighley’s chronicle flows with...ease and enticement.” — Seattle Magazine