Voyagers of the Titanic: Passengers, Sailors, Shipbuilders, Aristocrats, and the Worlds They Came From (Hardcover) 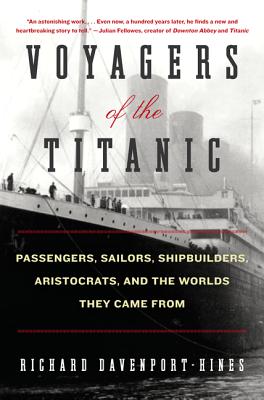 By Richard Davenport-Hines
$26.99
Hard to Find - May no longer be available

This is one of the most comprehensive overviews of the Titanic disaster, incorporating all of the major players in the liner's planning, construction, sailing, and demise. An excellent book for those who don't want to delve too deeply into minutia and a stirring recreation of the 20th Century's most momentous peacetime disaster at sea. — Alden Graves

“A book well worthy of marking the centenary of the crystal-clear night when the immense ship slid to her terrible doom.”
—Simon Winchester, New York Times bestselling author of The Professor and the Madman

It has been one hundred years since the sinking of the passenger liner Titanic in the North Atlantic, yet worldwide fascination with the epic tragedy remains as strong as ever. With Voyagers of the Titanic, Richard Davenport-Hines gives us a magnificent history of the people intimately connected with the infamous ship—from deal-makers and industry giants, like J.P. Morgan, who built and operated it; to Molly Brown, John Jacob Astor IV, and other glittering aristocrats who occupied its first class cabins; to the men and women traveling below decks hoping to find a better life in America. Commemorating the centennial anniversary of the great disaster, Voyagers of the Titanic offers a fascinating, uniquely original view of one of the most momentous catastrophes of the 20th century.

Richard Davenport-Hinesis the acclaimed biographer of W. H. Auden and the Macmillan dynasty. He is also the author of Proust at the Majestic: The Last Days of the Author Whose Book Changed Paris and The Pursuit of Oblivion: A Global History of Narcotics. He is a regular contributor to the U.K. publications Literary Review, Sunday Telegraph, Spectator, and the Times Literary Supplement.

“Here at last is the true memorial ... a book well worthy of marking the centenary of the crystal-clear night when the immense ship slid to her terrible doom”
— Simon Winchester

“An astonishing work, of meticulous research, which allows us to know, in painful detail, the men and women on that fateful voyage. Even now, a hundred years later, Mr. Davenport-Hines finds a new, and heart-breaking, story to tell.”
— Julian Fellowes, Creator and Executive Producer of "Downton Abbey"

“Paints a provocative portrait of the “upstairs, downstairs” social stratification in play aboard the doomed ship. A-”
— Entertainment Weekly

“The story of the Titanic has been told many times; this one takes a sociological perspective, with the confident, graceful prose of fine fiction.”
— Wall Street Journal

“Impressive in both its writing and reporting... It’s a romp. You don’t know who will be strolling down the deck next.”
— USA Today

“A shattering human story that is also, when told as well as Davenport-Hines tells it, utterly compelling.”
— Sunday Times (UK), lead review

“Eloquent and absorbing… It will stay afloat long after the armada of other Titanic books have gone down.”
— The Telegraph (UK)

“This will not be the last book on the Titanic, but it is a safe bet that there will not be a better.”
— The Spectator (UK), lead review

“This intelligent book focuses not on the ship so much as its passengers. Bolstered by photographs of the people who built, staffed, sailed on and survived the Titanic, Davenport-Hines finds a slew of new points of view from which to scan history.”
— Denver Post