The Savage City: Race, Murder, and a Generation on the Edge (Paperback) 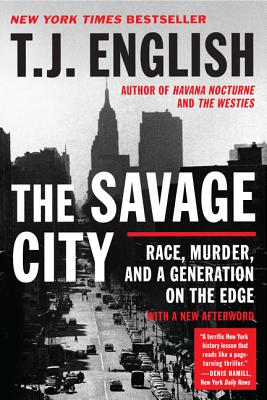 The Savage City chronicles a particularly inglorious decade in the history of New York City when racism and extortion were rampant within the ranks of the police department, This is a riveting book about official corruption on a scale so vast that it boggles the mind. — Alden Graves

“The Savage City is a fascinating chronicle of a brutal decade in the history of New York City. The story begins in 1963 with a double murder and then continues through the city's difficult struggle with the emerging civil rights movement. Alternating chapters follow a falsely accused black male, a dirty cop, and a rising member of the Black Panther Party, and together portray a time when corruption ruled. Readers are led through 10 years of murder, rape, race riots, and back door deals until, finally, real justice can begin to prevail.”
— Daphne Safrit, Literary Book Post, Salisbury, NC

“T.J. English has the mastered the hybrid narrative art form of social history and underworld thriller. The Savage City is a truly gripping read filled with unexpected twists and turns.”
—Douglas Brinkley, author of The Great Deluge

In The Savage City, T.J. English, author of the New York Times bestselling blockbuster Havana Nocturne, takes readers back to a frightening place in a dark time of violence and urban chaos: New York City in the 1960s and early ’70s. As he did in his acclaimed true crime masterwork, The Westies, English focuses on the rot on the Big Apple in this stunning tale of race, murder, and a generation on the edge—as he interweaves the real-life sagas of a corrupt cop, a militant Black Panther, and an innocent young African American man framed by the NYPD for a series of crimes, including a brutal and sensational double murder.

T.J. English is a noted journalist, screenwriter, and author of the New York Times bestsellers Havana Nocturne, Paddy Whacked, The Savage City, and Where the Bodies Were Buried. He also authored The Westies, a national bestseller, Born to Kill, which was nominated for an Edgar Award, and The Corporation. His journalism has appeared in Esquire, Playboy, and New York magazine, among other publications. His screenwriting credits include episodes for the television dramas NYPD Blue and Homicide, for which he was awarded the Humanitas Prize. He lives in New York City.

“[T.J. English] returns with a swashbuckling, racially charged nightmare about New York City in 1960s. This is one nightmare worth reliving because Mr. English so vividly recreates an era….he graphically reconstructs a rampaging decade through three lives.” — New York Times

“A searing profile of an ugly New York….The Savage City is meant to make us look back in anger and sorrow, perhaps to reflect upon what stayed the same as things changed.” — New York Daily News

“An epic look at the racial animus, fear, and hatred that characterized [a] troubled decade. . . . Through the lives of three ostensibly unrelated men, English peels back the underlying turmoil that led to the violent period and the unaddressed social ills that remain to this day.” — Booklist (starred review)

“It’s dripping with the kind of detail that’s too good to make up.” — Mother Jones

“A brutal reminder that New York was not always such a welcoming place.” — New York Post

“The Savage City is a necessary examination of the people, passions and maligned principles by which New York City once lived and died. English has a magnificent sense of the manner in which people, landscape, and history are bound together. Every world is a corner and every corner is a world.” — Colum McCann, author of Let the Great World Spin