Keep the Change: A Clueless Tipper's Quest to Become the Guru of the Gratuity (Paperback) 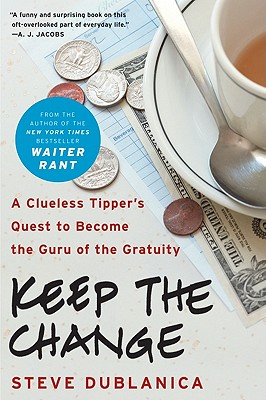 Most people have worked for tips at some point and know the importance of a "good" tip, but depending on your profession the amount varies. Dublanica interviews waitstaff, strippers, car wash attendants and a host of others to find out what is considered a decent tip. The answers will surprise you. — Sarah Donner

In the irreverent spirit of A.J. Jacobs and Michael Moore, Keep the Change by Steve Dublanica is a pavement-pounding exploration of tipping, a huge but neglected part of the American economy—the hilarious and eye-opening follow-up to his smash-hit New York Times bestseller Waiter Rant. Subtitled “A Clueless Tipper’s Quest to Become the Guru of the Gratuity,” Keep the Change follows the popular blogger known as “the Waiter” from restaurant to casino to strip club and beyond as he explores what to tip and how tipping truly plays out in practice in a series of candid, funny, and sometimes uproariously cringe-inducing adventures.

Steve Dublanica is the bestselling author of Waiter Rant, which spent twelve weeks on the New York Times bestseller list. He lives in the New York metropolitan area with his joint-custody dog, Buster.

“Funny and fascinating. . . . After reading this book, you’ll be sure to generously tip your hotel housekeepers and parking valets.”
— Wall Street Journal

“Half travelogue, half manifesto, the book recounts his misadventures in tipping as he travels across America talking with a cross-section of the 3 percent of the workforce that relies on tips.”
— Mother Jones

“Even seasoned service veterans might be surprised by the discoveries revealed in the book.”
— Boston Herald

“Giving a little extra just got easier with a master’s guide to gratuities. New York is the capital of tipping and no one understands that better than Steve Dublanica. The 42-year-old waiter-turned-author shares his expertise in Keep the Change.”
— Daily News

“Funny and illuminating, it’s recommended to anyone seeking enlightenment about gratuities.”
— Library Journal

“I’m not sure what the proper etiquette is for tipping authors, but we should all give a nice bonus to Steve Dublanica for writing such a funny and surprising book on this oft-overlooked part of everyday life.”
— A.J. Jacobs

PRAISE FOR WAITER RANT: “…amusing and informative…along with the stories, some of which are hilarious, Dublanica provides useful advice for the customer...Waiter Rant is as delightful as it is irreverent.”
— Washington Post Book World

“Waiter Rant has all the fixings for fun....What Anthony Bourdain’s tell-all about life in the kitchen did for Hollandaise sauce, Waiter Rant will do for side salads.”
— Los Angeles Times

“The main attraction here is [Dublanica’s] acerbic, biting and often hilarious accounts of life behind the scenes at the front of the house.”
— Wall Street Journal

The other shoe finally drops. The front-of-the-house version of Kitchen Confidential; a painfully funny, excruciatingly true-life account of the waiter’s life. As useful as it is entertaining. You will never look at your waiter the same way again–and will never tip less than 20%.
— Anthony Bourdain

“Anyone that has ever eaten in a restaurant is going to want to grab [this book].”
— Matt Lauer, Today

“Writing a best-seller is a big deal, and the Waiter deserves a 20% tip for serving up such a fun summer read.”
— Forbes.com

“The Waiter dishes candidly on the outrageous behavior of staffers and customers at the undisclosed upscale restaurant where he works...[Waiter Rant] leaves no doubt that servers deserve not only 15 percent but an occasional pound of flesh, too. In his debut memoir, the Waiter extracts it with panache.”
— American Way

“For enlightenment on how to handle such situations, I reached out to The Waiter. You know, the New York City-based guy who created the wildly entertaining Waiter Rant blog, which is now a cannot-put-it-down book.”
— Seattle Post-Intelligencer

“…here is my unabashed recommendation: If you eat out with any regularity, read this book!”
— Chicago Sun-Times

“Lucky for the reader, The Waiter has kept his eyes open and is willing to gossip about what he has seen from the other side of the menu.”
— Tampa Tribune

“Fortunately, The Waiter (who has since outed himself as a chap called Steve Dublanica) does more in this book than get even; he provides thoughtful insights into how the restaurant business works.”
— Bloomberg News

I really enjoyed WAITER RANT. The book is engaging and funny, a story told from my polar opposite perspective. I will now do my best to act better as a Chef -- and I dare say, I’ll never be rude to a waiter again, as long as I live.
— John DeLucie, Chef, The Waverly Inn

“In the casual, confessional tone of a seasoned blogger, The Waiter tells of corruption, intrigue, drug abuse, heated romance and of course tips, weaving it all into a humorously detailed memoir. . . . A heartfelt, irreverent look at the underbelly of fine dining.”
— Kirkus Reviews